In the main event, Jillian “Lionheart” DeCoursey battled Lindsey VanZandt through three exciting rounds of action. These two atom weight fighters left their hearts inside the cage. Throughout the first two rounds, DeCoursey and VanZandt exchanged strikes, but it was the champion’s pressure that controlled the rounds. After a takedown by DeCoursey in the third round, VanZandt locked her legs around DeCoursey’s head in a triangle. VanZandt, nine years younger, nearly finished the champion with a submission in the final seconds of the championship bout. VanZandt showed promising glimpses of a bright future throughout the bout. The less experienced fighter fell to the No. 1 ranked female in the state of New York after giving a valiant effort.

DeCoursey, resembled a longtime veteran as she improves to 7-1 in her amateur career. After defending her atom weight belt, wrapped around her waist once again by Triton Fights ring girl, Melisa Vlasaty, DeCoursey slung her three other belts over her shoulders and made it clear she wants to appear on an Invicta FC card for her pro debut.

The co-main event was a matchup between two tall, long and lean fighters. Eric Ott (2-1) of Bellmore Kickboxing and Long Island MMA scored the Knockout of the Night with his nineteen second TKO over Dan Coleman (2-1), of Striking 101.

​
Ott caught Coleman with a counter right hook, followed up by a left hand that came down the middle, dropping the six foot four inch tall undefeated Coleman. Ott pounced on his hurt opponent, delivering an anvil size fist numerous of times on Coleman until the referee ended the middleweight title fight.

In the bantamweight championship fight, it was a battle of the Rodriguez’s. Carlos Rodriguez of MCF, and Daniel Rodriguez of Jungle Gym went two and a half rounds in front of a sold out crowd. Back-and-forth, high-level striking by both gentlemen, at an intense pace. The Jungle Gym’s fighter’s reach made it tough for Carlos to get inside. Carlos used impressive head movement to avoid a large portion of Daniel’s strikes, but Daniel’s power showed when he connected on a strike.

In the end, a larger Daniel Rodriguez captured the back of Carlos in round three and at 1:50, Daniel finished Carlos via a Rear-Naked choke to earn the U.S.M.T.A. Bantamweight title.

Humberto Perea (5-2) of Class 1 MMA, put his high-level grappling on display against Ron Leon of Kai Next Level MMA. Perea dominated Leon through three rounds, as he applied heavy pressure and ground-and-pound from the guard. Perea defeated a fighter that has been successful recently on the New York MMA circuit. It was clear by the judges scoring the dominating Perea demonstrated. All three Judges scored the bout 30-27, as a unanimous decision. The Class 1 MMA fighter claimed the U.S.M.T.A. Featherweight title.

Jason Olcott of Team Ronin improved to 3-0 after winning the KTFO featherweight title against Jamie Perea, of Class 1 MMA. Olcott showed poise of a veteran inside the cage Saturday night at World’s Collide. Olcott stole the back of Perea and sunk in a night ending Rear-Naked choke, giving him the submission victory.

Jeremy Puglia, exchanged fists with Jamal “Redd” Pottinger at World’s Collide. Puglia’s nickname should be “Tank” because the middleweight is built like a German Panzer tank. Puglia, fighting out of Vamos BJJ, defeated a tough opponent, Jamal “Redd” Pottinger, of Striking 101. These two warriors fought in a catchweight fight at 190-pounds.

The fight started with strike exchanges between the two men and clinching against the cage. Eventually, Puglia found separation and unloaded shells upon Pottinger with his explosive uppercuts. The referee jumped in front and called the fight, giving Puglia his third victory in round 1 via TKO, at 2:12.

This fight was a contender for Fight of the Night, Gulfin and Vinson battled three rounds towards the ACC strawweight title.

In the first two rounds, the women attacked each other with aggressive exchanges. Gulfin snagged the upper hand after earning takedowns in the first two rounds and attacking Vinson with offensive submission attempts. At one point in both the first and second round, Gulfin had an Arm Bar that appeared to be ending Vinson’s night. Some way the Beast Mode MMA fighter managed to escape the submission attempts. In round two, Vinson drew blood from Gulfin with a cut over the left eye. The referee paused the bout, brought a doctor in to make sure the fighter was safe, after being given the “ok” by the doctor, the fight resumed.

In the third round, Vinson’s wild punches in the first two rounds that weren’t connecting finally began landing. Vinson stole round three. This bout kept fans on the edge of their seat until the final bell. Gulfin earned a Unanimous decision, 29-28 on all three judges’ score cards. Gulfin claimed the ACC strawweight title.

Dami Powerson and Mark Sagur some way went three full rounds after both fighters dropped each other in the first round. In the second and third round, Powerson scored big takedowns and controlled Sagur from the top, where he delivered ground-and-pound. Powerson picked up his third victory, improving to 3-2 overall. The Striking 101 fighter tested himself in a fight that was full of highs and lows. He demonstrated a big heart Saturday night. Powerson won via unanimous decision 30-27 across the judges’ cards.

Mike Fitzroy improved to 2-0 after his impressive win over Steve Inoshima. Fitzroy, fighting out of Long Island MMA, used his wrestling to dominate the match on his way to a unanimous decision (30-27, 30-27, 30-27). The bantamweight fighter is a talented young individual with a bright future ahead of him! Expect him to be competing for a Triton Fights 135-pound title within his next two bouts.

Josh RosenBlatt earned his first victory in style with a knockout over Jon Potts. Rosenblatt fights out of Renzo Gracie, and caught Potts at 2:42 of round 1. Potts (Monster MMA) fell to 1-1 in his young amateur career. The KO highlight of Rosenblatt is below.

​
Joe Soto won a split decision over Invictus MMA’s Tyler Portelli. Soto earned his first victory and prevented Portelli from earning his. Portelli lost a point in the second round for striking Soto to the head while on the ground. They fought under novice rules, which requires shine guards and doesn’t allow strikes to the head of any kind while on the ground. Joe Soto won via split decision 29-27, 29-27, 27-29.

The first fight of the night started with an impressive submission by Kai Next Level MMA’s Mamdou Nasr. Nasr defeated a much physically larger Don Macchio via an Arm Bar. In this flyweight fight, many were reminded not to judge a book by its cover as Nasr showed technique and heart are the most important requirements of all tangibles to leave victorious. Both fighters were making their debut, and Nasr earned his first victory in round 1, at 1:48.

“Being a great fighter is doing what everybody didn’t expect out of you,” Nasr said.

Fight of the Night honors is awarded to the ladies of the main event. DeCoursey and VanZandt didn’t disappoint in the fine bout of the evening. An amazing bout both ladies should be proud of!

World’s Collide was broadcasted live via FloCombat.com. Dan Canobbio and Jason Griggs supplied the commentary. All of the TV’s throughout the theater in The Space at Westbury showed the fights live.

The merger of ACC and KTFO proved to be an ultimate success last night at World’s Collide. The production of the event was unprecedented. Broadcasted live via Flocombat.com and streaming on TV’s in the bar area inside the theater, made it impossible to miss the action.

Matchmaker Eugene Perez built another enjoyable fight card for the fans. It was a fight card that created a foundation for future matchups in Triton Fights. And, the dynamic of amateur MMA landscape in New York has shifted greatly.

The co-owners of Triton Fights, Nic Canobbio, Tom Kilkenny, and Eugene Perez should proud of their newly formed organization’s inaugural event, World’s Collide. The theater remained packed from the first fight to the last fight. 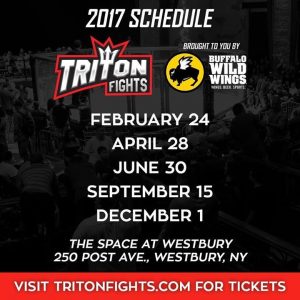