Alliance MMA’s publicly traded stock (NASDAQ: AMMA) closed at the lowest point it has seen since trading began in October 2016.  AMMA’s last trade was at just 95 cents today, eight months after opening at $4.50 a share. 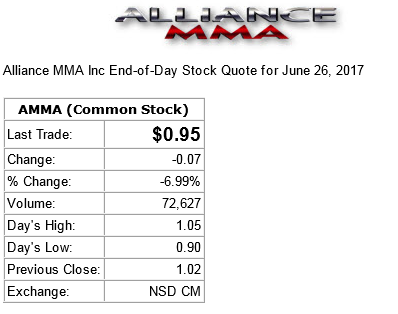 Each day sees highs and lows but the day does not necessarily end at those points.  Today’s high was at $1.05, just three cents higher than Friday’s close of $1.02 per share.

Alliance MMA, Inc. was incorporated in 2015 for the purpose of acquiring businesses that engage in the promotion of mixed martial arts (MMA) events. In 2016, the company completed an initial public offering that culminated in a listing on the NASDAQ stock exchange. Alliance MMA is currently the only mixed martial arts promotion company that is publicly-traded. It was the first of its kind to do so since the International Fight League in 2006.

Several law firms announced earlier this year that they would be filing suits against Alliance MMA and that they were investigating potential securities claims on behalf of shareholders of Alliance MMA, Inc. (NASDAQ: AMMA) resulting from allegations that Alliance MMA may have issued materially misleading business information to the investing public.

On March 31, 2017, Alliance MMA announced that it would be unable to timely file its Form 10-K for the period ended December 31, 2016 due to efforts to resolve certain matters relating to non-cash compensation expenses incurred prior to its initial public offering on September 30, 2016. On April 12, 2017, Alliance MMA revealed that its previously issued condensed consolidated financial statements for the nine months ended September 30, 2016, for the quarter ended September 30, 2016 and for the three and six months ended June 30, 2016 should no longer be relied upon because of an error in recognizing as compensation transfers of common stock by an affiliate of Alliance MMA to individuals who were at the time of transfer, or subsequently became, officers, directors or consultants of Alliance MMA.

Where the market will go and the value of the Alliance MMA stock in a day, week, month, or even a year is anybody’s guess.

What time does the forex market open in South Africa?

We will keep you updated as figures continue to fluctuate.

By Jim Foliano 13 hours ago

By James Lynch 22 hours ago

By 'Beautiful' Bob Meloni 24 hours ago

By Eric Kowal 24 hours ago