After having competed in eight MMA bouts and two kickboxing bouts, Anastasia has not yet recorded her first win, but will not stop trying either.  She has lost nine of the 10 fights, and went once to a draw under K-1 rules.

Anastasia began training with Jamal Pottinger at Team Redd, but has now transitioned to Kai Next Level Mixed Martial Arts.  The Brooklyn, New York native really had no experience with martial arts growing up although she was athletic, competing mostly in basketball.

“I was just training with Redd.  I saw him fight and thought ‘wow, this is something I want to do.’ He then probably asked me about 10 times if I wanted to do it.  I finally said yes and he put me through the gauntlet for six months.  That’s when I fought Julian DeCoursey in my first fight.  I didn’t know anything about martial arts before I met Redd.”

“I moved to Kai about six months ago.  We moved there because I didn’t have a grappling coach, and we’ve been working on my ground game a lot,” Anastasia explained.

“All the losses.  After about the fifth fight that I had, I realized the sport is serious and there is something to it.  There’s a certain mindset you need to have.  That was something I didn’t have when I first started.  One day I was sleeping and then I woke and said to myself, ‘You have to get your head in the game.’ I realized this is some serious shit.  I was watching a Cris Cyborg fight and I wanted to be like her.  I realized she is my motivation to keep going.” 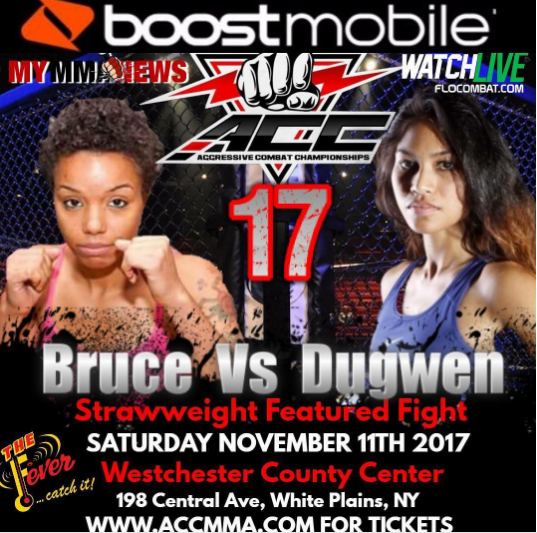 The 22-year old Anastasia fights Jennifer Dugwen (1-1) at the Westchester County Center.  TheACC 17 event will be streamed exclusively on FloCombat.com.

“I just know that she is a boxer, and that she isn’t very good on the ground,” Anastasia said of her opponent.  “That’s really all I know.”

Both Anastasia Bruce and Jennifer Dugwen have a common loss to Destiny Quinones, now a training partner of Bruce at Kai Next Level.

“I train with Destiny all the time.  Destiny is very experienced and she helps me a lot.  A lot with ground games, submissions, takedowns, she’s very helpful.”

Quinones was not even supposed to compete on the ACC 17 fight card.  Then just a few days ago submission specialist Erin Blanchfield who will be making her MMA debut, lost her opponent, and Quinines stepped up.

How did you get the Savage Beauty nickname?

“When I was with Team Redd he called me ‘Savage Beauty’ because he thought I was a savage in the cage with my striking.  I do a lot of makeup for women, and that’s where the beauty came in.  I’m a makeup artist.”

As a make up artist, does it concern you that one day you may be going to work with a black eye and a few stitches as a result of fighting?

“I haven’t gotten a black eye yet but, yeah, a lot of my customers will tell me, ‘You’re too pretty to fight.’

“There’s so many fighters that are prettier than me.”

You seem very determined to get that first win next month.  How do you see this fight going down?

“I see me taking her to the ground.  I’m good with my striking but she’s probably better than me there so we’ll see how this fight goes on November 11.”

I want to thank Jamal Pottinger and Kai Next Level Mixed Martial Arts for helping me out.”

By Doug Geller 8 hours ago