Details to an alleged domestic assault on UFC flyweight fighter Andrea Lee are still sketchy, but a publicly released version of a police report has shed some light as to what happened the night of Saturday, August 4, 2018 into the morning of August 5.  According to a call made to police, Andy Nguyen, professional MMA fighter and best friend of Lee called for assistance after Lee was allegedly assaulted by husband Donny Aaron.  Aaron made headlines earlier this year after photos of Nazi tattoos on his arm surfaced online.

In 2009 Aaron was also found guilty and convicted of negligent homicide with a firearm and spent time behind bars.

According to a police report obtained by MyMMANews.com (see below), Aaron’s offenses include false imprisonment and domestic abuse/battery. He has not yet been charged/arrested as he fled the scene.

According to Nguyen, Aaron allegedly attacked Lee at their home in Shreveport, Louisiana on Saturday, August 4, following UFC 227.

Nguyen, who lives with the couple and their daughter, said she went to bed when she heard arguing during the UFC 227 pay-per-view fight, continuing on through the night until the next morning.

Below is a statement provided to the police by Nguyen:

“I’m in the bedroom, I’m trying to sleep, in their house. I can hear them complaining about how Mighty Mouse got robbed. Now the fights were done. I hear Donny yelling down. I sat up in the bed and I’m like ‘what the hell is going on?’ I get a text message from Donny’s mom asking if she needed to come over there. I was like ‘no.’ Then I hear more yelling, he’s cussing her out. So I opened my door and she (Andrea) runs into her daughter’s room. Donny is trying to burn a cigarette on her arm and her body. She’s yelling to stop trying to burn her. Donny’s dad is the only one helping me. His dad is like 70 or 80 years old. There’s another guy named Kendrick there who is this big strong guy, who wouldn’t get out of his room to help me. He put on his headphones and was like ‘this happens all the time.’ He just tuned it out.

“At the time I was not in shock that it was happening, I was just panicking. I ran back into my room and text his mom and said ‘ I do not want to call the cops. Can you come here?’ This was at about 1:30 a.m. (now August 5). I fell back asleep. I wake up at 4:30 a.m. I still here Donny. At 4:30 his mom and dad had left. I turn on my lights and open door so Donny knows I’m awake. Usually he does crazy stuff behind closed doors. I went to the kitchen. I hear them bickering. Then it got quiet. I thought maybe they were done. Then all of a sudden I heard a grunt and the dog was in the kennel and started barking. I can hear her saying “stop, stop.” I opened up the door and was like “Donny, leave her alone.” He looked like he was lost. He hadn’t slept in two days. He was drinking for two fucking days straight. I don’t know what he is on. I’m backing up as he is coming towards me. Andrea was buttoning up her shorts and she was barefoot and ran out the back door.

“Then Donny was yelling, “she’s been cheating on me for three fucking years.” I was like “no she hasn’t. You’ve been thinking she has. She hasn’t done anything.” Then he saw her running and he was like “oh, no you’re not” and went after her. She’s sprinting. It’s 5:30 a.m. I put on my gym clothes to chase after if I had to. Donny goes back in the house and he’s like “I did it again, I did it again.” I was like ‘what did you do? Did you kill her?’ because he has killed someone before. I didn’t know if he grabbed a rock and banged her head. I was scared to walk outside. He was like no ‘I made her run barefoot again.’ I told him to give me the keys to the jeep and he refused because he thought she would think it is him and would not stop.

“I knew there was no gas in the jeep because I drove it home last because Donny was drunk at the bar. He finally gives me the keys and the sun is coming up. I drove to the gas station. I jumped out and called the cops from the gas station. I told them that my best friend is getting hurt from her husband. Gave name and address and like six cops showed up. She had Uber’d to a hotel. I met her at the hotel and I gave her all her belongings and then the cops came over to the hotel and they did the interrogation or investigation or whatever.

“I was not there at the house when the cops came but Donny saw the cop cars coming and he ran out the house with his dad and he has been gone ever since.”

“They had been arguing all week. She couldn’t train because he kept her home. He wouldn’t let her leave. I didn’t call the cops until it got physical and I couldn’t do nothing anymore.

“He was trying to choke her, but she was defending herself well. She didn’t get beat up bad. The police did take pictures of marks on her neck. Wasn’t bad this time. No black eyes or anything but he has hit her before. I just wasn’t there. He was my coach and my friend. This was the first time this was in presence and I was not going to let this fly.

“The domestic violence has been going on for years. I just never saw it. Here’s another the thing. The UFC and many other people offered Donny FREE tattoo cover up and he still never did it. You see online, the small swastika on his elbow. I have a bigger picture of a bigger tattoo on the shoulder that nobody knows about. All he had to do was cover the little one but he didn’t. I would have done it for my wife to save her career but he didn’t. This is shitty. It’s not Andrea’s fault. She is sweet and kind and she forgave him all the time. This time, this is it.”

See below police report obtained by MyMMANews.com.  Addresses and phone numbers have been removed. 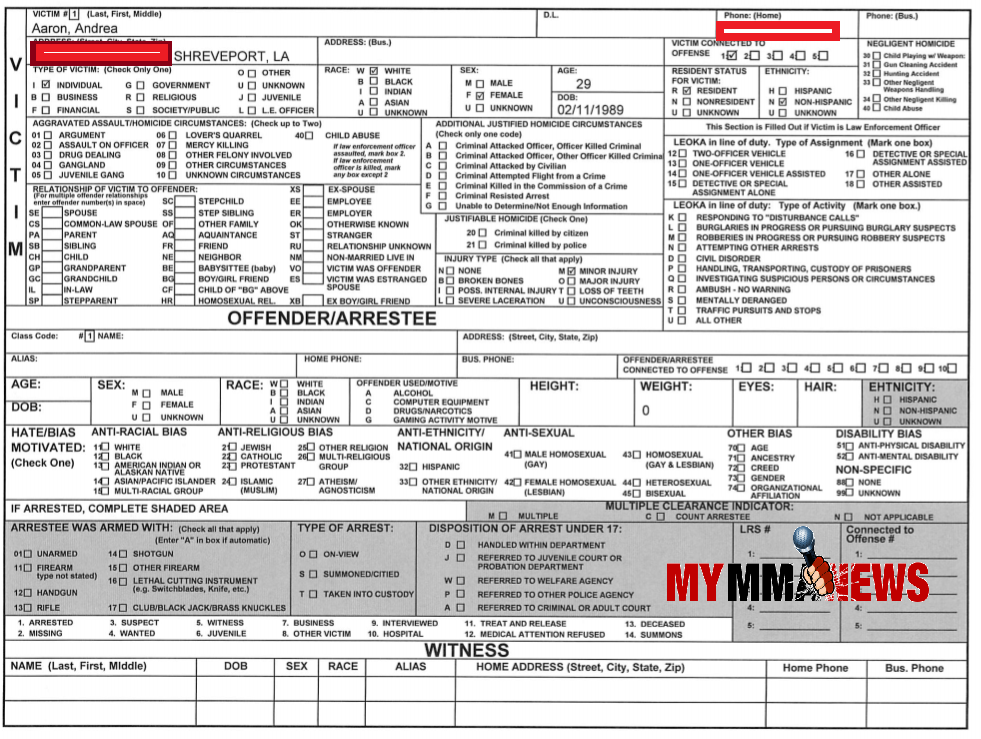 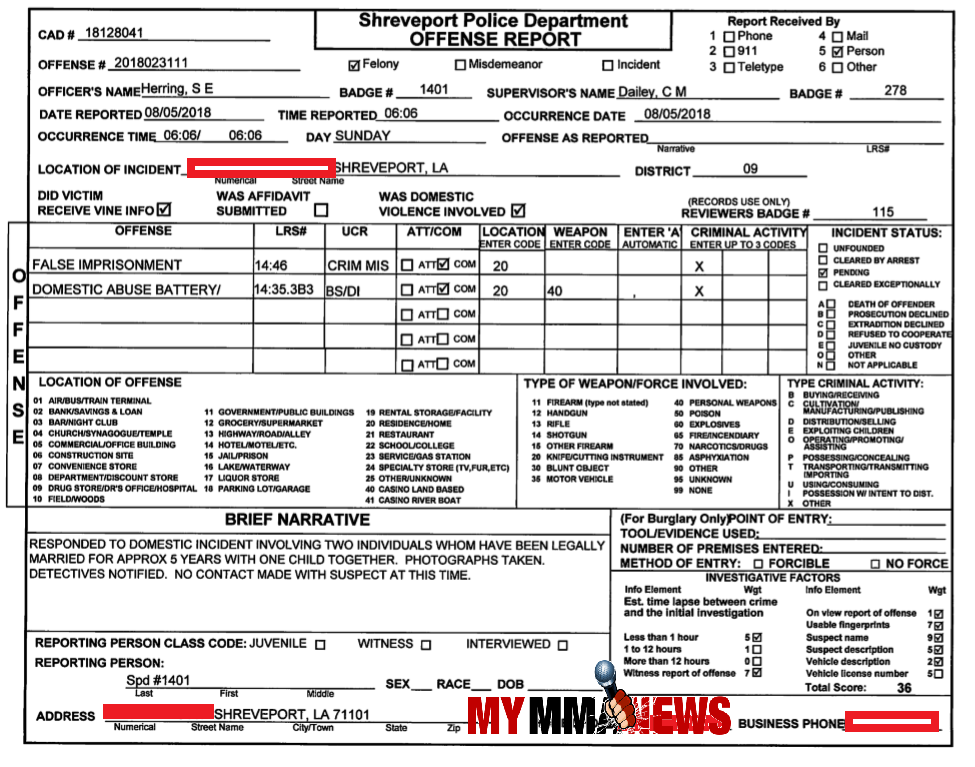 By Adam Martin 12 mins ago

By David McKinney 36 mins ago