Ever since she missed weight for her UFC 224 bout with Amanda Cooper, Mackenzie Dern’s heat has grown, recently catching the attention of not only current UFC women’s strawweight champion Rose Namajunas, but now seasoned UFC strawweight competitor Angela Hill, only for a different reason.

After an updated list of the current top 15 UFC strawweight rankings were released earlier today, it seems now that Dern has apparently slid into the 15th spot as a result of her victory last Saturday in which Hill previously held. Frustrated and disrespected by the controversial move, Hill took to Twitter to express her frustrations on the rankings while taking a slight jab at Dern. 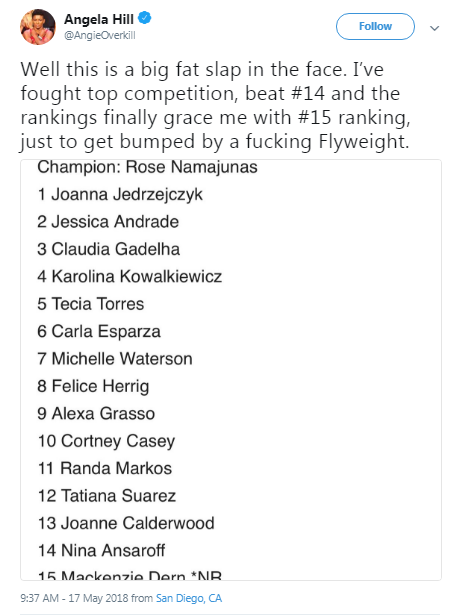 It’s understandable to see Hill’s stance here, for the simple fact that Dern technically won a fight not in her natural weight class or weight limit, so to a certain extent Dern has been awarded this spot by default, which by logic will come off as political or undeserving.  But no matter how we or Angela Hill herself may feel about it, the unfortunate reality here is that Mackenzie Dern is the #15 ranked UFC women’s strawweight; hate it or love it.

Will we see Angela Hill and Mackenzie Dern handle their business inside the UFC octagon?