The MMA career of New Jersey bantamweight Nezzar Dimes may just be getting started, but the former JUCO wrestling standout has set high goals for himself — one of which is becoming an ambassador for Palestinian mixed martial arts.

In this interview with the up-and-coming 23-year-old, we delve into why his nickname means so much to him, what sets him apart from fellow rising mixed martial artists, the gains being made at Dante Rivera BJJ Academy, and more.

Dimes has been powerfully inspired by Khabib Nurmagomedov and Belal Muhammad for the examples they’ve set for Dagestan and Palestine, respectively. He may be young within this sport, but Dimes is driven to be a positive light for Palestine along with the entire Middle East.

“What sets me apart is the heart that I have,” he began, “And my love for the game. My passion, my resiliency, I never give up. Also, I wanna be an ambassador for MMA and for wrestling. You know how like Khabib played a big part in making Dagestan what it is now and all the other Russian provinces. I wanna do the same thing, not only for Palestine but all the other Arab countries and Middle Eastern countries.”

“I wanna help make wrestling and MMA the next big thing back home,” Dimes continued. “Fighting in the Arab world is definitely growing and on the come up though. I want people to be like when they think of Middle Easterns, ‘man those guys are really good wrestlers, wow they’re really good MMA fighters’. The way people think of Dagestan is the way I want people to think of the Middle East when it comes to combat sports as a whole.” 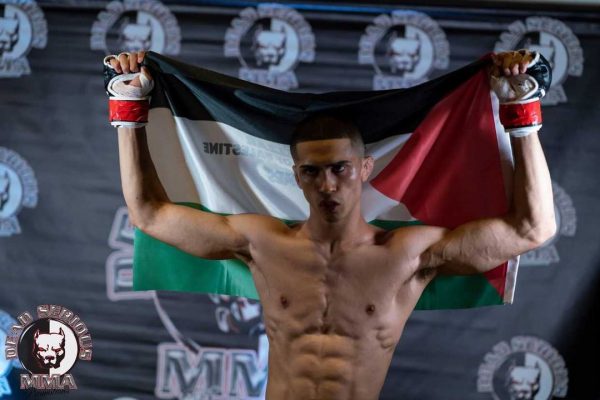 Dimes is a second-generation Palestinian, with his father being born in Brooklyn, NY. It’s evident that his Palestinian blood runs through his veins, so much so that he dons the nickname “The Prince of Palestine” inside the cage.

“My nickname actually came from my coach Ash,” Dimes said. “He’s actually a refugee from Palestine. Yeah, he’s from Gaza. So he kinda gave me that nickname cause of a world Muay Thai champ named Rami Ibrahim. They call him ‘The Son of Palestine’ so he kinda took that name and revised it, put a twist on it for me. It’s a cool name. Not only for fighting for me, but also fighting for what’s going on back home. Just representing my people. I’m just trying to put my people on the map.”

Dimes decided to transition to MMA following a largely successful JUCO wrestling career at Middlesex Community College. Over the summer, he picked up two amateur wins and he hopes to make his pro debut in the near future. Getting his hand raised inside the cage was a fulfilling feeling for the young fighter.

“So this all goes back to the whole thing in Palestine,” he affirmed, “Leading up to my fight there were all those protests going on. The whole incident in Gaza. I try to keep politics out of my fighting, but sometimes you gotta. It definitely gave me an extra boost of motivation. It was something special man. Especially too after not competing for all of 2020 after I lost in 2019 in JUCO nationals. Then, Division I wrestling wasn’t really working out. So MMA was really my calling for sure.”

A special gym in the making

“We have some wars in those rooms,” he stated. “There’s so many top-level guys man. Coach Ash and of course Dante, it’s just awesome. The cool thing about Dante, especially with my high-level wrestling, is he’s a black belt in both Jiu-Jitsu and Judo. So when he collaborates that with my wrestling, it’s gonna be very freakin hard to beat me. I really think we’re gonna end up beating out gyms like American Top Team and AKA. Everyone’s starting to pay attention to us and for good reason.”

“I’ll start by saying this and I said this after my last fight is that I’m evolving,” he noted. “As I level up just know that I’m not just a wrestler. People are gonna see more and more striking from me as time goes on that’s for sure. But obviously, wrestling is my bread and butter, it’s my background, it’s where I come from, my true roots. But believe me man, I can throw hands too. I can light people up so I’m looking to really start lighting the crowd up and stuff like that.”

Make sure to be on the lookout for Dimes’s next fight. He made clear that he’s looking to fight again soon, possibly on a CFFC card. If you enjoyed this article make sure to share it so others can read it!

Ryan Truland is an MMA writer who conducts interviews with athletes, provides creative pieces, and whatever else is needed to keep readers up to date on the latest and greatest MMA news.

By David McKinney 3 hours ago