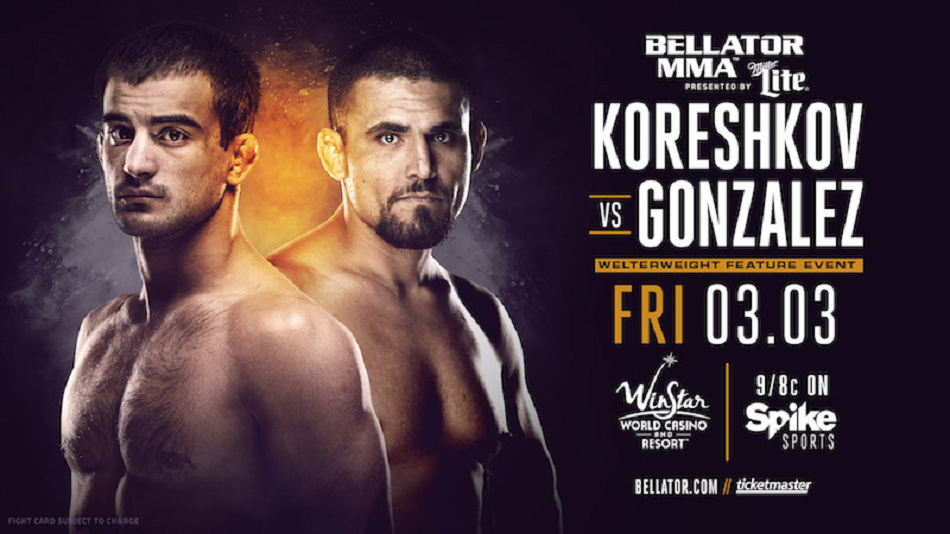 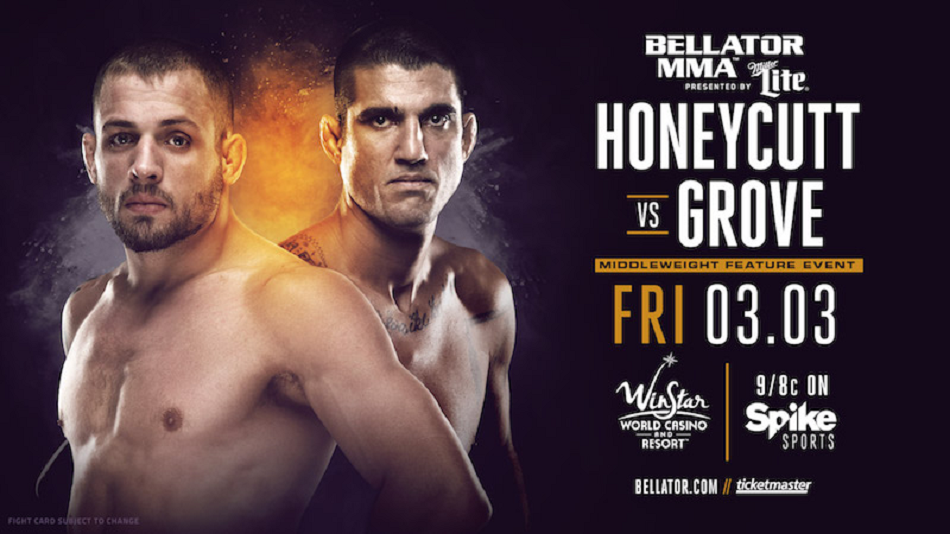 HOLLYWOOD, CALIF. (February 3, 2017) – A welterweight fight pitting Andrey Koreshkov (19-2) against Fernando Gonzalez (25-14) and a middleweight bout featuring Chris Honeycutt (9-1, 1 NC) against Kendall Grove (23-16, 1 NC) have been added to the main card of Bellator 174: Corenen vs. Budd on March 3 at WinStar World Casino & Resort in Thackerville, OK.

The bouts will join a card that is headlined by the first-ever Bellator MMA Women’s Featherweight World Title fight pitting Marloes Coenen (23-7) against Julia Budd (9-2). One additional main card contest will be announced shortly.

Bellator 174: Coenen vs. Budd will be broadcast live and free on SPIKE at 9 p.m. ET/8 p.m. CT, while preliminary action will stream on Bellator.com and the Bellator Mobile App. Tickets for the event are on sale now and can be purchased at the WinStar World Casino & Resort Box Office, as well as Ticketmaster and Bellator.com.

Hailing from Omsk, Russia, the 26-year-old Koreshkov will enter the cage for the 22nd time in his professional career and 13th under the Bellator MMA banner. “Spartan” began his career with 13 consecutive victories, including his first five wins under the direction of the Scott Coker-led promotion. Koreshkov continued to see success as his name began to grow in the mixed martial arts world, collecting six wins over his last seven fights, including a welterweight world title victory over current champion Douglas Lima and a successful title defense over Benson Henderson. With 10 of his 19 career wins coming by way of knockout, the Russian phenom possesses the type of power that can put an emphatic end to any opponent’s night when he is in the cage.

A 39-fight veteran of mixed martial arts, Gonzalez will be making his seventh appearance under the direction of Bellator MMA. Since joining the promotion in 2014, “The Menifee Maniac” has tallied five victories, including a brutal knockout of Karo Parisyan just 1:43 into the bout. In his most recent contest, Gonzalez nearly edged the undefeated Michael Page, becoming just the second opponent to take him the distance in a controversial split decision. With 16 of his 25 career wins coming by way of knockout or submission, the 33-year-old Gonzalez continues to be one of the most feared strikers in Bellator MMA’s stacked welterweight division.

The 28-year-old Honeycutt will make his 2017 debut, following an impressive 2016 campaign that saw him emerge victorious in each of his three bouts. A native of Fresno, Calif. “The Cutt” had a blazing start to his professional career, earning victories in each of his first six contests, including four knockouts and three first-round finishes. Honeycutt continued to see success under the Bellator MMA umbrella, collecting five wins over a three year stretch. Fireworks are all but guaranteed in this slugfest, as the equally fearless Grove hopes to give the Thackerville fan base exactly what they came for.

Hailing from Maui, Hawaii, Grove will be making his make his eighth appearance for Bellator MMA, as the veteran continues to climb the ranks in a competitive middleweight class. “Da Spyder” has finished 17 of his 23 career victims, including seven of his last eight, making him must-see television every time he competes on SPIKE. The 34-year-old striker also holds a significant height advantage over his opponent, standing at 6’6′ compared to Honeycutt’s 5’10′ frame. With each of his last six bouts ending in a stoppage, we can be sure to see more of the same aggressive style when he and Honeycutt go toe-to-toe inside WinStar World Casino & Resort on March 3.