Bellator MMA Light Heavyweight Kingpin Liam McGeary will be joined by his divisions no. 1 contender, Phil Davis and The Peoples Champion, Tito Ortiz 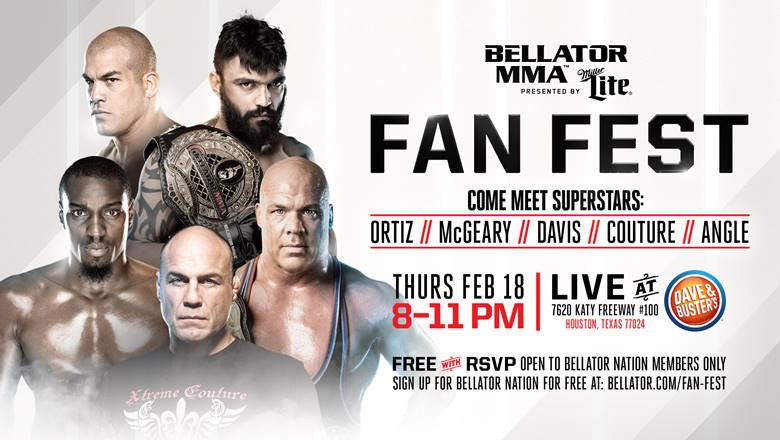 Fans of all ages are invited to Dave and Buster’s in Houston, TX to meet and receive autographs from some of the greatest and most popular combat sports fighters of all time. Fans will also have the opportunity to win tickets and great prizes, as well as snap a photograph with the Bellator ring girls.

WHO:                        The first British World Champion in the history of MMA will always be Liam McGeary. At 6’6 the towering fighter has achieved notoriety around the world with his impressive skillset which has seen him end fights with impressive knockout power as well as jiu-jitsu prowess.  Currently undefeated at 11-0, the future is bright for the Bellator MMA Champion. Most recently, McGeary defeated fellow Fan Fest participant Tito Ortiz in the main event of the groundbreaking “Bellator MMA: Dynamite 1.”

Bellator MMA’s no. 1 contender in McGeary’s light heavyweight division is none other than “Mr. Wonderful,” Phil Davis. A two-time division 1 All-American wrestler at powerhouse program Penn State, Davis has truly made a name for himself in MMA, being world-ranked within the top 5 in the 205 lb. division.  In his Bellator debut at the promotions “Dynamite 1” event, Davis won the LHW one-night tournament by scoring two victories – a submission and a knockout – in the same night.

One of the most recognizable MMA fighters of all time, Hall of Famer Randy Couture transitioned nicely into the entertainment world after his fighting career, starring in several television shows and movies, most notably the Expendables franchise and Dancing with the Stars. Inside the cage, Couture was a fearless underdog, often defeating men with great size advantages.  “The Natural” was a multi-time heavyweight and multi-time light heavyweight champion in the UFC.

Dave Meltzer’s “Wrestling Observer Newsletter” named Kurt Angle the “Wrestler of the Decade” for the 2000s. Angle has constantly been on top, winning wrestling tournaments since high school. In 1996, Angle won his first gold medal at the Olympics in the 90-100 kg division. After winning the gold he pursued a career in professional wrestler. He is the only one in history to have won championships in WWE, WCW, TNA and IWGP, totaling an impressive 13 World Championships and 21 total championship belts.

Also fighting –former light heavyweight champion Emanuel Newton (25-9-1) and Linton Vassell (15-5, 1 NC) will look to recreate their epic 2014 barnburner. In featherweight action, Emmanuel Sanchez (12-2) will look to continue his torrid pace when he meets Daniel Pineda (21-11) and a pair of lightweight assassins go to battle, when Melvin Guillard (35-15-2) returns to meet Mike Bronzoulis (18-9-1).