BELLATOR MMA RETURNS HOME TO SAN JOSE, CALIF. ON MAY 14 WITH KING MO VS. PHIL DAVIS AND MICHAEL CHANDLER VS. JOSH THOMSON IN TOW 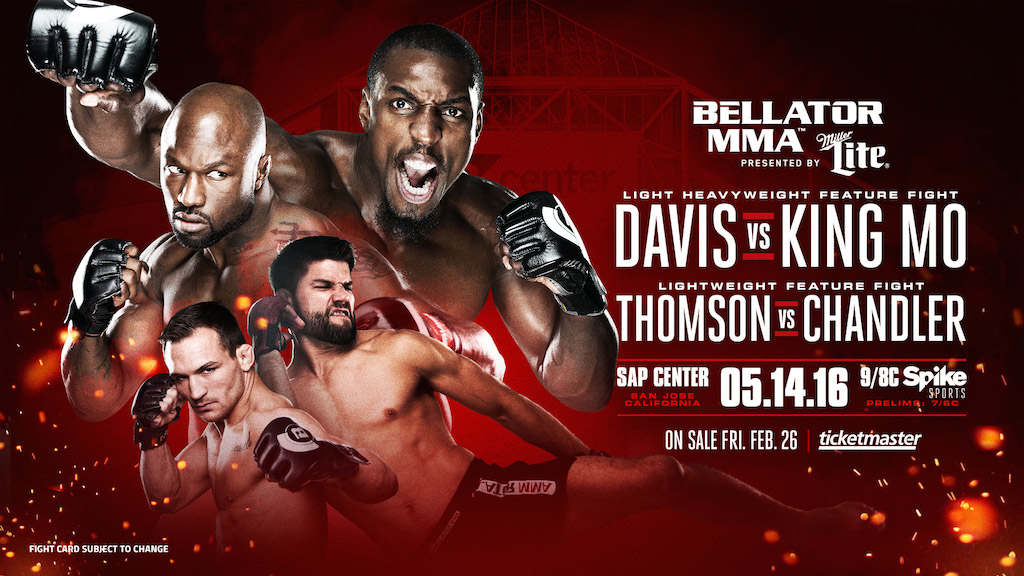 HOUSTON, TEXAS (February, 19) – Bellator MMA is pleased to announce its next tentpole event, “Bellator 154: Davis vs. King Mo,” which will emanate from the SAP Center in San Jose, Calif., on May 14 and air LIVE on SPIKE.

A light heavyweight bout to determine the No. 1 contender for Liam McGeary’s (11-0) title will anchor the card, when Muhammed “King Mo” Lawal (19-4, 1 NC) meets Phil “Mr. Wonderful” Davis (15-3, 1 NC) in a contest that was supposed to decide the victor of the 205-pound tournament at “Bellator MMA: Dynamite 1.”

But that’s not all –

Tickets for this MMA supershow start at $30 and go on sale Friday, February 26 at 10 a.m. at Bellator.com, as well as SAP Center Box Office and Ticketmaster. Bellator Nation Presale offer will begin Wednesday February 24.

To reach this point, both Lawal and Davis had to dispatch of multiple opponents over the course of one night to win two separate tournaments. Lawal most recently was victorious in a light heavyweight tournament for Rizin FF in Japan, beating Brett McDermott, Teodoras Aukstuolis, and Jiri Prochazka, running his current winning streak to seven-fights.

For Davis, his Bellator MMA debut came in September, when he ran through both Emanuel Newton and Francis Carmont enroute to winning the tourney at “Bellator MMA: Dynamite 1.” The 31-year-old Alliance MMA product was slated to face “King Mo” in the final of the bracket, but Lawal suffered a broken rib that forced the fight to be delayed.

Chandler and Thomson have seemingly been on a collision course since Thomson entered the Bellator MMA fray, mainly due to a barrage of questions to both men that revolved around the other and when/if they would eventually meet inside the cage.

After racking up two wins – both in San Jose – against Mike Bronzoulis and Pablo Villaseca, Thomson, a member of American Kickboxing Academy, has his sights set on a matchup with the 14-fight Bellator veteran.

A native of Missouri, “Iron Mike” has been riding a wave of momentum following emphatic victories against Derek Campos and Dave Rickels. The 29-year-old former lightweight kingpin has made it clear that he intends on fighting everyone on the Bellator MMA roster, which he hopes culminates in another run with championship gold wrapped around his waist.

By Mike Heck 41 mins ago