At 24-years-old, Brett “Big Dog” Martin, is living the life he wants to be living. He works for the Coopersville Public Works department and gets to use his hands to fix things in the city in which he lives. In his other job, Martin uses his hands in a more destructive manner. The Big Dog is a 4-0 heavyweight fighting out of Grand Rapids, Michigan and is looking to improve his record to 50 when he faces veteran Leroy Johnson (7-2) for the WXC (Warrior Xtreme Cagefighting) heavyweight championship on August 3.

Martin started his combat sports journey when he started wrestling as a second grader. He continued wrestling and became a state champion in the 285-pound division while at Hesperia High School, which is known as a wrestling power house in the state of Michigan. He won the 285-pound title in high school and in college he was an All-American at Muskegon Community College before going on to wrestle at Eastern Michigan University.

While many fighters start out as wrestlers, and many of them saw fighting as a career path, Martin only started thinking about it after watching a friend of his fight. Still in college at the time, friends encouraged him to look into fighting. After he graduated, he gave it a shot. And he has enjoyed it so far.

“It’s just fun to have that kind of sport and be able to keep doing stuff after college and into my adult life.”

The Big Dog went 7-1 as an amateur before turning professional. But what is most interesting and impressive about his amateur career is that he trained by himself and not as part of a gym.

“All lot of people don’t know is that I never trained at a gym as an amateur, I did all my training by myself. I did drop in training with other MMA fighters but a lot of my amateur career, it was just like I learned about wrestling, grinding it out, training hard on my own and motivating myself.”

It was when he decided to turn pro that he decided he needed a gym to train at. 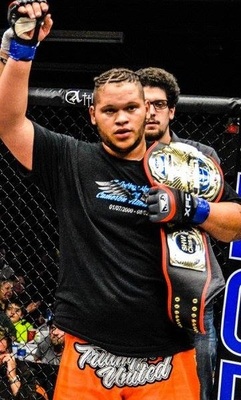 “When I went pro was when I kinda sat down and said this where I need to be established and find a gym. Make sure I have people around me telling me what I’m doing wrong and doing right.”

Since turning professional, Martin has been training at Triumph Training Center and has gone 4-0as a pro with one no contest. Though known as a wrestler, he isn’t afraid to throw his hands.

“When I first started, obviously I knew my wrestling would be my go to cause a lot of big guys don’t like that. I’ve obviously used that to anchor my career, that’s definitely my fall back. But when I throw and it lands, it always does good things.”

“I haven’t really shown a lot of my stand up in a lot my fights.”

Part of the reason Martin hasn’t been able to showcase all of his skills recently is because he has been dealing a lingering knee injury. He suffered knee injuries in high school and college which required surgery and suffered another in his fighting career. The injury forced him out of a fight this past spring but he says, he is now a hundred percent healthy and ready to put on a show.

“I’ve been fighting a knee injury for three years.”

“I’ve been feeling great, camp’s been great, training’s been great, I feel a lot different. I’ve never fought with a completely healthy knee so it’s definitely a different feel knowing I’ll have all my push and flexibility with my knees again.”

While healthy, Martin has been working on his goal to become the fastest heavyweight in the world. Believing that power isn’t as key as timing and speed, he has worked on getting leaner and in better shape. When he was out of college he weighed over 300 pounds. Now he is looking weigh around the heavyweight limit of 265 pounds which he thinks will make him a more dangerous fighter.

“When I first started fighting I was up to like 330, 335 after college. Obviously over the years of fighting I went down a little bit. I never really had a great diet plan, nutrition, it’s something we’ve been working on over the last year or so. With me growing up, I’m a lot stronger now than I used to be three or four years ago. Now its just trying to get more and more lean and get rid of this belly at some point in time maybe.”

“I think with me sticking around 265, or lighter than 265, 250-240 area I think I’ll be a completely different style animal for the fact that it’s taking a lot of weight off my legs and my movement. I think I can retain a lot of my power and move very well.”

“I’ve always said your 205 stylistic fighters are usually your scarier fighters. because A, their more athletic and their cardio is usually on point.”

And he has done this before in wrestling and the results were positive.

“I wrestled 215 my whole high school career so when I switched over to heavyweight my senior year, I was a complete different world. Just for the fact I was more athletic than a lot of the guys I faced.”

With a fully healthy knee and a lower weight, Martin believes everyone will see the best version of himself when he takes on Leroy Johnson for the WXC heavyweight title on August 3 at WXC 73. Johnson is a tough veteran who has fought the likes of former UFC fighter Pat Walsh. This is a fight that has been in the works for a while and Martin is very excited for it.

Friday August 3rd we’re bringing the “Big Dog” Crew to the east side!! Thanks to all of my amazing sponsors I have booked a 46 PERSON PARTY BUS to haul everyone from Grand Rapids to Detroit and back. $10 gets you on the bus and $20 gets you on the bus and a Big Dog shirt to wear on fight night. Let’s support both West Michigan MMA and BigDog as he becomes the WXC Heavyweight Champion!!! Thank you everyone for the continued love and support! Have plenty of tickets on sale for everyone interested. Please lmk if ya need anything or want more info on this. #BigDog #ForCamCam #Believe

69 Likes, 7 Comments – Brett Martin (@bigdog285) on Instagram: “Friday August 3rd we’re bringing the “Big Dog” Crew to the east side!! Thanks to all of my amazing…”

“This fight is huge for me.”

“I get to test my skills against one of the top guys which is what I’ve been asking for.”

And he thinks he matchesup well his Johnson.

“I think I match up with him as good as I would match up with anybody. A lot of people have no idea what I throw on my feet cause I’ve never had to show it. So now you have two fairly high-level wrestlers going at it, it should be fun.”

Though he wants to show the skills people haven’t seen from him before, the Big Dog is still looking to end the fight in spectacular fashion.

“I’m fighting for a finish.”