USADA announced today that UFC® athlete, Carlos Diego Ferreira, of Amazonas, Brazil, has accepted a 17-month sanction for an anti-doping policy violation after declaring the use of a product that listed and contained a prohibited substance, and testing positive for another prohibited substance. 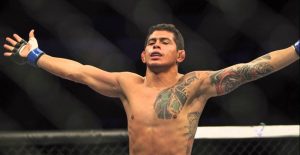 Ferreira, 31, tested positive for Ostarine as a result of an out-of-competition drug test conducted on April 29, 2016. During the sample collection process, Ferreira declared the use of a product on his sample paperwork that listed the prohibited substance 7-keto-DHEA (7‐keto-dehydroepiandrosterone) as an ingredient. Ferreira’s sample was subsequently reported as adverse for the presence of Ostarine, a prohibited Selective Androgen Receptor Modulator (SARM), along with a laboratory finding that was consistent with Ferreira’s declared use of a product containing 7-keto-DHEA. Both Ostarine and 7-keto-DHEA are prohibited substances in the class of Anabolic Agents and prohibited at all times under the UFC Anti-Doping Policy, which has adopted the WADA Prohibited List.

Ferreira’s 17-month period of ineligibility began on April 29, 2016, the date his positive sample was collected and the date on which he declared his use of a product that contained two prohibited substances.