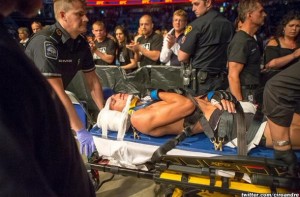 “UFC featherweight Charles Oliveira has been released from medical care in Saskatoon today and will be traveling home tomorrow. Preliminary test results for major chest, neck or throat injuries were negative and Oliveira will have a follow up appointment with his local physician upon returning home. Oliveira is in good spirits and appreciates the support he’s received from his fans during this time.”

By Edward Carbajal 24 mins ago