Christian Carr is a young man who is wise beyond his 20 years on this earth.  I’ve gotten to know “Strictly Business” Carr since he was 17 years old.  His parents, as well as his coaches, have done a tremendous job keeping him grounded and focused.  Carr is already a student of the game and a sponge who absorbs as much information as possible from those around him who have had success in the sport of mixed martial arts.

After the high school wrestling stand-out graduated, he went right into the work field and became even more dedicated to the gym and training. Christian calls Gracie 717 out of Lancaster, PA home, but has traveled to work out at Algeo MMA and Kickboxing who has a strong, deep fight team.  His main training partner has been John “Bearcat” Brennan who is also on the fight card for AOW 14 on November 23rd at the Lebanon Valley (PA) Expo Center.

Christian has an unblemished 4-0 record as an amateur and is an exciting fighter to watch.  I have been cage-side doing commentary for his first three fights.  Carr has a wide array of attacks and is not just stuck on being a wrestler.  He will throw spinning and flying attacks if he spots an opening and his submission game is strong.  His fourth fight was at Cowboy Fight Series 2 where he won via tapout over Rob Shermer.  Carr had this to say about his latest win…

“I had to fight and defend for almost 3 minutes with my opponent on my back.  It was the first time I really faced that type of adversity in a real fight. I was able to turn the tables though and catch him in an arm triangle to get the sub.”

You can check out our entire interview with Christian Carr on the link above.  Carr will face off on Nov 23rd with Grindhouse MMA’s Shawn Steffanelli for the AOW bantamweight amateur title.  It would not shock me at all if Christian gets his pro license after this fight.  His talent is on that level despite his age.  This title fight will be advanced amateur rules.

MyMMANews will be on site for up to the minute results and some post fight interviews.  William McKee will be doing his thing and catching all of the great action with his camera.  Stay right here for all of your combat sports needs. 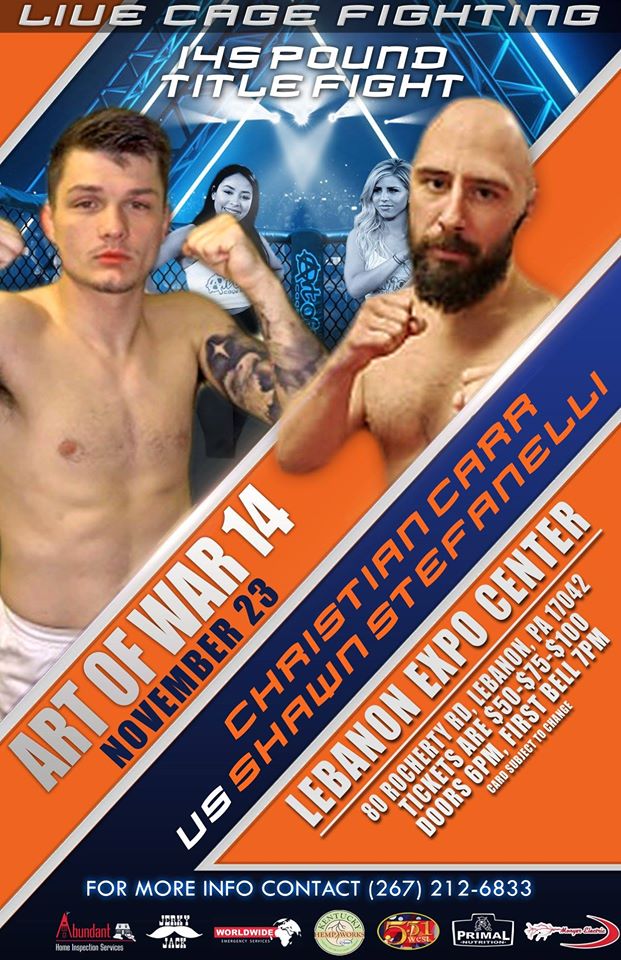