Cherry Hill, New Jersey’s Ryan Kim Cafaro (7-4) felt that the stars had finally aligned. After battling some of the best on the east coast while under the Cage Fury Fight Championships banner, and having felt short in a decision during a title shot with Maverick MMA, the 30-year old fighter was yet to put together a title win as professional.

Things were about to change. Cafaro felt confident, ready to tackle new territory as he transitioned to Ring of Combat, another prominent promotion on the east coast, who also broadcast their events on the UFC’s digital streaming service, UFC Fight Pass.  A title win with ROC could easily grab the attention of UFC matchmakers, possibly positioning oneself for a spot on the upcoming season of Dana White’s Contender Series.

“Korean Thunder” Ryan Kim Cafaro had signed a contract to take on Ring of Combat featherweight champion Frankie Buenafuente at ROC 70 on November 23 in Atlantic City.

Less than three weeks out from fight night, Buenafuente announced that he would not be cleared to compete.

“I’m sorry to announce my fight has been called off due to injury,” his Facebook post read. “I am fine but I will not be Medically cleared in time for the fight to have a hard training camp. I will be back in that cage as soon as possible. Thank you everyone who supports me and all my sponsors.”

Cafaro was devastated, unsure if he would still be on the card.

Officials with the promotion have confirmed to MyMMANews that this fight will be for the interim featherweight title.

Dooling challenged Bill Algeo for the ROC promotion’s 145-pound title in November 2017.  He came up short that night, then fought three more times, once for ROC, and twice for CES MMA.  Of the three contests, Dooling was only able to pick up one win, and it just so happened to be with the ROC promotion, thus allowing him to get right back into title contention.

Cafaro has never competed for Ring of Combat, but his experience both in competition and coaching is unmatched in the region.  He trains with some of the best, has fought some of the best.

This Cafaro-Dooling contest is a must watch situation for most any fight fan.

There is no word on how long Buenafuent will be out but look for the winner of this contest to challenge for the official title in 2020. 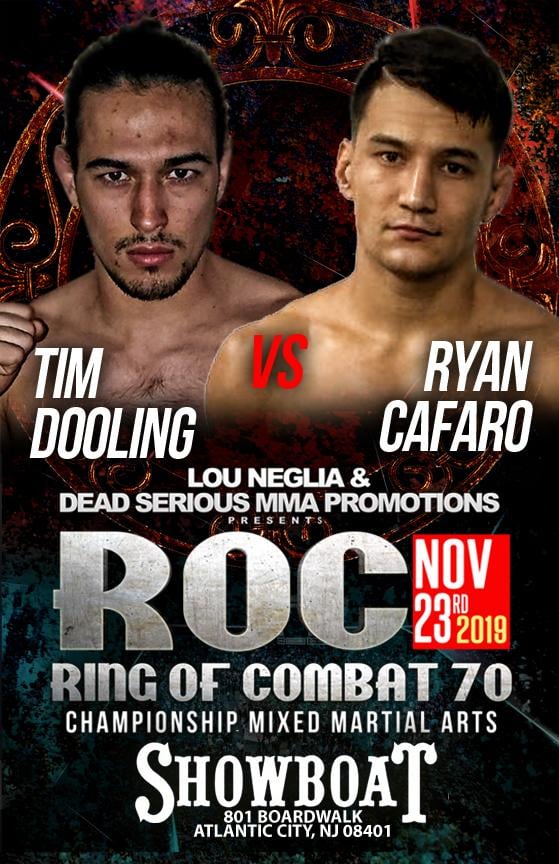 By Mike Heck 6 hours ago