Tickets for “Combate11” on sale now 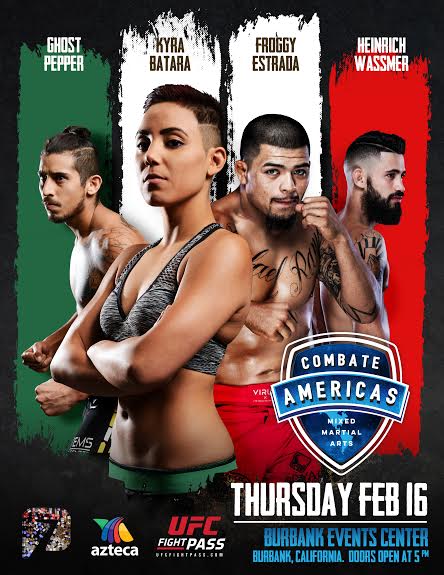 The event will also air via tape delay in Mexico the following night, Friday, Jan. 20 at 11 p.m. CT., on TV Azteca, S.A.B. de C.V. (BMV: AZTECA; Latibex: XTZA), one of the two largest producers of Spanish-language television programming in the world.

Priced from $45, tickets for the event – “Combate11” – can be purchased online at ItsMySeat.com.

Elsewhere on the live telecast, fellow knockout artists Erick “The Ghost Pepper” Gonzalez (5-1) and Danny “The Realist” Ramirez (5-2) will face off in a lightweight (155 pounds) attraction, while unbeaten, heavy-handed Jose “Froggy” Estrada (2-0) will take on submission artist George “Furious” Hernandez (4-3), also at lightweight.

The 4-foot-11, 22-year-old Batara of Las Vegas, Nev. has been unstoppable in La Jaula, the Combate Americas cage, winning all three of her matchups, including a second round (4:13) TKO of Jenny “The Phoenix” Silverio that Batara produced in an unprecedented manner – a ground and pound assault with Silverio locked in a “twister,” the patented submission move created by Batara’s famed mentor, Eddie Bravo.

Making her U.S. debut, Rico Fernandez (2-2) of Alicante, Spain holds a second-degree black belt in Judo and is a 13-year member of the Spanish national Judo team and former national freestyle wrestling champion. Her two professional MMA career victories to date both came by way of submission.

The 5-foot-10, 26-year-old Sanchez of Sacramento, Calif. is an explosive finisher who will enter La Jaula for the third time in his career, on a three-fight winning streak.

The Team Alpha Male member has put away all three of his last opponents by way of (T)KO or submission, including his last adversary – Mike Segura – whom Sanchez forced to tap out from a rear-naked choke just 50 seconds into their meeting at Combate Americas last April 18.

Fighting out of Roswell, N.M., the 6-foot-, 25-year-old Quintana is another devastating force who has earned all but one of his nine professional career wins by way of (T)KO.

Quintana will attempt to bounce back from his only loss in nearly five years – a first round (2:10) TKO (body kick and punches) at the hands of Adrian Diaz, on May 19.

The 5-foot-10, 25-year-old Gonzalez of Torrance, Calif. will risk a three-fight win streak, including two consecutive victories under the promotion of Combate Americas.

Gonzalez has notched four of his five professional wins to date via (T)KO. In his last start, he handed Cuban upstart Yoandy Carrillo his first career defeat by way of TKO (punches) in the second round (3:13) of battle.

A native of Los Angeles and former U.S. Marine, the 5-foot-9, 27-year-old Ramirez fights out of Sacramento and, like his opponent, has claimed victory in all but one of his five conquests, via (T)KO.

The hard-hitting Ramirez scored a third round (1:02) TKO (punches) on Chuck Seang in his last appearance on August 27.

In less than one year as a professional, the 5-foot-6, 26-year-old Estrada, known best to his fans as “Froggy,” has already earned the reputation of a brutal puncher, scoring first-round knockout wins in each of his two starts, both of which took place in La Jaula.

The Fillmore, Calif. resident made a mark in his professional debut, putting Jonathan Quiroz flat on his back with a single punch in just under two minutes.

The 5-foot-10, 35-year-old Hernandez of Santa Rosa, Calif. will seek his first win under the Combate Americas banner, and attempt to stop a three-fight skid.

After turning professional just two years ago at age 33, Hernandez cruised to victory in his first four bouts, defeating three of his opponents by way of submission and the fourth by way of TKO.