Former two-division UFC champion Conor McGregor has retired from mixed martial arts.  Well…. at least according to a tweet that the Irish MMA superstar sent out on Monday night.

“Hey guys quick announcement, I’ve decided to retire from the sport formally known as “Mixed Martial Art” today,” McGregor wrote in the post. “I wish all my old colleagues well going forward in competition. I now join my former partners on this venture, already in retirement. Proper Pina Coladas on me fellas!”

Hey guys quick announcement, I’ve decided to retire from the sport formally known as “Mixed Martial Art” today.
I wish all my old colleagues well going forward in competition.
I now join my former partners on this venture, already in retirement.
Proper Pina Coladas on me fellas!

“The Notorious” was on The Tonight Show with Jimmy Fallon earlier in the evening (although the show was taped last week) but did not make the announcement there. He actually hinted towards working towards a fight with the UFC for July.

“We’re in talks for July,” McGregor told Fallon. “So we’ll see what happens. A lot of politics going on. The fight game is a mad game. But again, like I said, and to my fans, I am in shape and I am ready.”

McGregor is likely the highest paid mixed martial artist to ever compete in the sport, making it hard to find fights that not only peak his interest and worthwhile, but also appeal to the fanbase that want to see him compete in high profile fights.  A potential fight between McGregor and Donald “Cowboy” Cerrone was presented earlier this year, drew quite a bit of attention, but then fell apart as it was rumored that the UFC wanted the bout to be a co-main event feature, something McGregor did not agree with.

“Notorious” Conor McGregor made upwards of $100 million for his 2017 boxing match against the undefeated Floyd Mayweather Jr.  Combine that with his pay from the UFC, sponsors, and now his highly lucrative whiskey business in Proper 12, McGregor is set for life.

UFC President Dana White tends to believe that McGregor truly is walking away from the sport and for good reason.  Dana’s statement below: 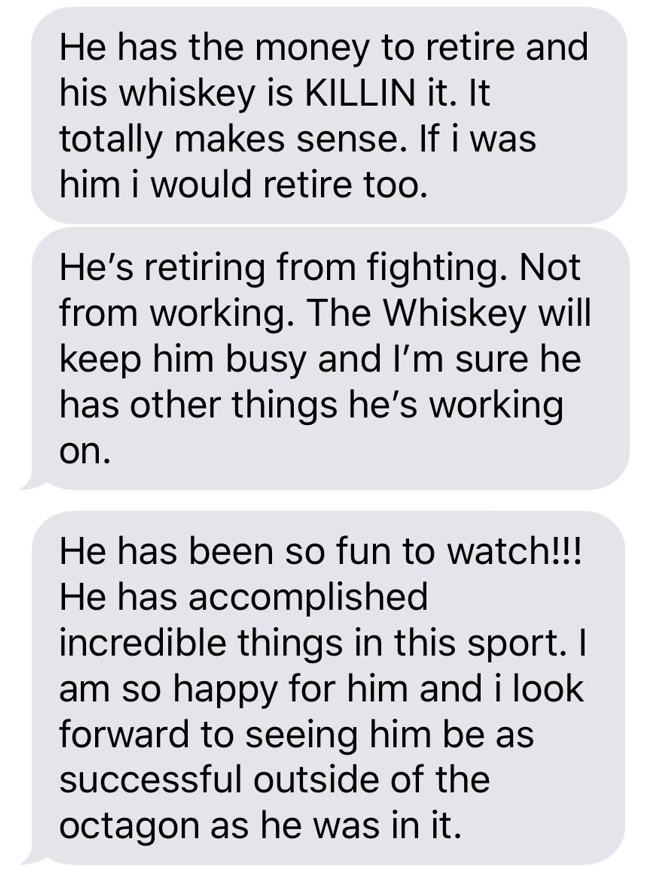 McGregor last fought at UFC 229 in October 2018, losing to UFC lightweight champion Khabib Nurmagomedov.  If that contest truly was McGregor’s last MMA fight, he will retire with a  21-4 record and is a guaranteed future UFC Hall of Famer.

By Staff Report 19 mins ago

By Andy Stevenson 6 hours ago