Damon Minor (9-1) has accomplished more with little more than a year fighting in the amateur rankings than many amateur mixed martial artists accomplish in their entire amateur career. 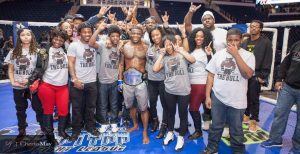 Minor has been there and done that and is nearly on the cusp of turning pro. Tune in below as MyMMANews’ own, Adam Crist goes head to head with Damon Minor to discuss his recent title win, success at a young age, and much more! Tune in below!