Ring of Combat 78 capped off with three highlight reel finishes in the final three bouts here at the Tropicana Casino and Resort in Atlantic City.  On November 18 at ROC 78, I was cageside on commentary and post-fight interviews with ROC and UFC veteran “Raging” Al Iaquinta and Jay Regalbuto.

Here is my take on the card and the official results…

Speaking with Diamond Striking’s Justin Burke before the event, he told me not to expect much stand-up from his protege’ Russ Korbul.  That gameplan worked to perfection.  Alcala looked sharp in the few chances he got to have some distance and strike, but “the Korbulizer” was able to score the majority of round one with ground control and strikes.  Round 2, Korbul right in on a shot and gets another takedown and eventually gets the back, which quickly transitioned to mount, where he finished the fight via referee stoppage.

Jay Regalbuto is very familiar with Guariglia, who calls himself “Big Nog. Guariglia used his grappling and cage control to win this bout.  The majority of the fight was on the ground and Lebron was not able to get ahead in that battle.

Torretta and Ruiz treated everyone to a fantastic fight.  Both warriors scored constantly throughout the fight.  Ruiz was in chase mode often as Torretta was brilliant with his movement and level changes.  Torretta landed a variety of kicks as Ruiz countered back with his length and hands.  Do yourself a favor and go watch this fight.  It’s a shame that either fighter had to get a loss.

This was high energy from both fighters as soon as the bell rang.  Jiminez seemed to be a little craftier early on, but the power of Kwiatkowski was starting to show.  You could see Jiminez respecting that big right hand from Kwiatkowski as it was being launched frequently and heavily.  As we head to round 2, Kwiatkowski continues his savagery and gets the finish due to strikes.  For 135lb, Chris has some of the heaviest hands I’ve seen.

Lane dominated with his elite wrestling from the opening bell.  We saw lots of ground and pound and some submission attempts.  In the post-fight interview, Lane was angry that he couldn’t get the finish.  There were also reports that Lane injured his hand early in the fight, which may have affected his grip throughout the fight.

Gjetja is feeling confident, training full time with Ray Longo and company.  He bursts out of his corner and gets inside on Zimmerman landing his left hands.  Zimmerman is a vet and is trying to weather the storm.  He defends well. Gjetja still coming forward and lands a big head kick and Zimmerman goes down.  Gjetja with a hammer fist before the ref can step in and stop the fight.  Major props to Piankhi for stepping up on short notice to save this fight. He is a solid contributor to the MMA community and a good guy. Gjetja was just a force tonight.

Drago aggressive immediately throwing combinations, follows with a headkick and forces Farias back against the cage where he lands a knee to the chin that was the beginning of the end.  Another vicious knee and the hands are flying as the referee stops in at just :34   Drago via TKO knee R1  :34 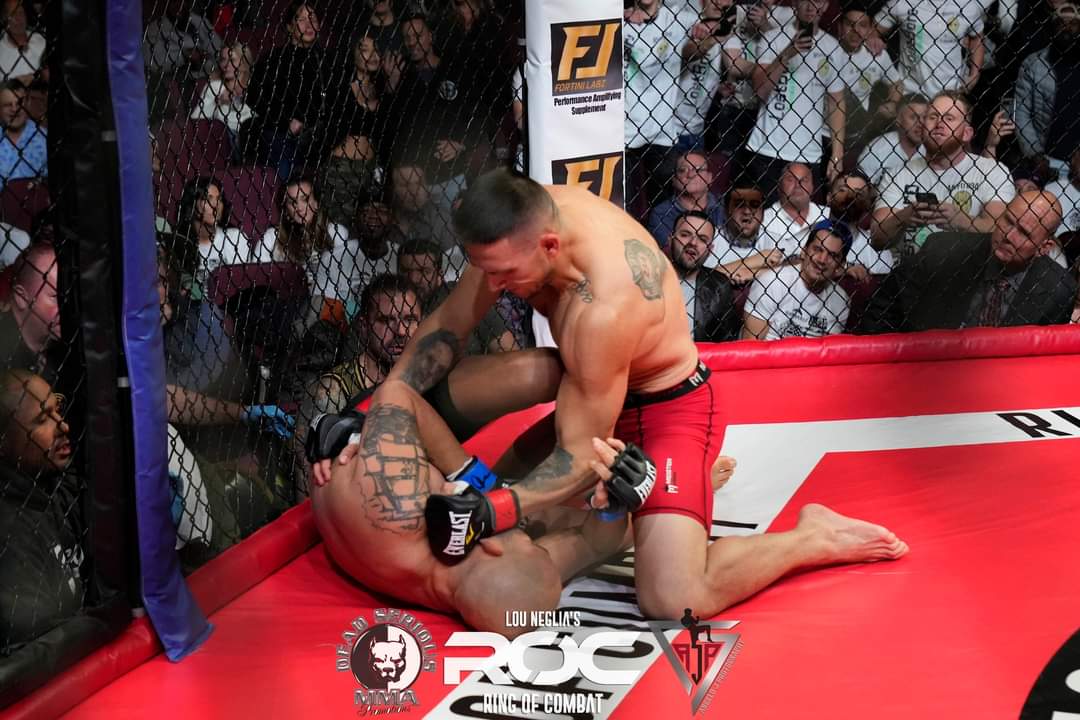 The first round was action packed as Ramirez boxing has looked really good.  Mantello not bashful is right there inside trading and scoring.  A back and forth round 1 but I thought Ramirez landed more damage and volume.  Round 2 was once again non-stop as Mantello gained some confidence and was getting the better of the exchanges and was pouring it on as round 2 ended.  As round three opened, the fighters tapped gloves, reset, then Mantello stepped in and landed a bodykick that buckled Ramirez and finished the fight in highlight reel fashion just 7 seconds in.