It appears we have 23-year-old Brazilian Jiu-Jitsu phenom Erin Blanchfield’s next bout lined up, and it’s not against 25-year-old prodigy Casey O’Neill as many of us were hoping for. 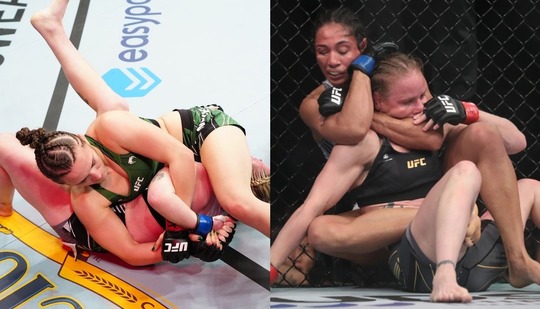 Blanchfield has been nothing short of dominant as they come since arriving to the big show last year in 2021, where she went 2-0 in the year before also going 2-0 this year. Her first two promotional wins came via unanimous decision, her scoring totals reading 30-25, 30-25, 30-26 for her debut, and a universal 30-27 in her next win over Miranda Maverick.

She then submitted her two opponents in 2022, stopping both JJ Aldrich (guillotine choke) and Molly McCann (kimura) in style. Blanchfield landed 111 unanswered strikes in her latest performance against McCann, which is just astounding when you consider what McCann’s done lately (back-to-back spinning elbow knockouts going in).

What’s more, the only defeat of Blanchfield’s career came via split decision in her fourth fight.

If all that isn’t enough, Blanchfield is already a BJJ black belt, and she won the Eddie Bravo Invitational as a teenager. She’s an very highly touted prospect for a reason.

Then we have Taila Santos, who, like Blanchfield, has only ever lost via split decision.

First there was her UFC debut that she lost, a heavily disputed result, before going on a four-fight win streak en route to her title shot against Valentina Shevchenko.

Many believe Shevchenko to be the women’s goat, and many also believe Santos won four rounds against her. Others believe she won three of the five rounds, and others believe it could have gone either way.

Merely no one saw Shevchenko as the winner of that fight.

Who walks away from this women’s flyweight contest going down at UFC Fight Night 219 the victor?