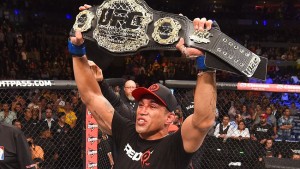 According to Ariel Helwani on UFC Tonight who spoke to Werdum’s manager Ali Abdel-Aziz, the deal is worth seven figures.

“To be honest with you,” he said, “they didn’t have to do a new deal. We’re very thankful. [Werdum] wants to end his career as a UFC fighter, and the UFC was extremely supportive and generous.”

Werdum will defend the title he won in a rematch against former champion Cain Velasquez in February at UFC 196.

The Brazilian defeated Velasquez for the title via guillotine choke back in June.

Werdum holds a 20-5-1 professional record and has not loss since returning to the UFC back in 2012.

Dan Hooker vs. Jalin Turner the latest addition to UFC 285