It has not officially yet been announced by the UFC but there are reports that a bantamweight showdown between number eight ranked Bethe Correia and number nine ranked Jessica Eye has been booked for the upcoming February 21 show in Pittsburgh, Pennsylvania. 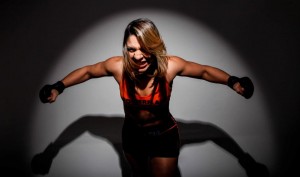 Pitbull last fought against Ronda Rousey at UFC 190 where she was knocked out at just 34 seconds in the first round.  It is the only blemish on her 9-1 professional mixed martial arts record.

Before that Correia dispatch of Shayna Baszler vis TKO, and Jessamyn Duke and Julie Kedzie by way of decision.

Eye (11-4-1) is currently coming off two hard fought unanimous decision losses in fights to Miesha Tate and Julianna Pena.  MyMMANews caught up with “Evil” over the weekend at Trackside Grill and Bar in East Stroudsburg, Pennsylvania.  Check it out here.

No main event has been announced yet for the event however the UFC Fight Night 82 card currently looks like this: