‘THE YOUNG ASSASSIN’ VS. ‘THE GREEK ASSASSIN’ 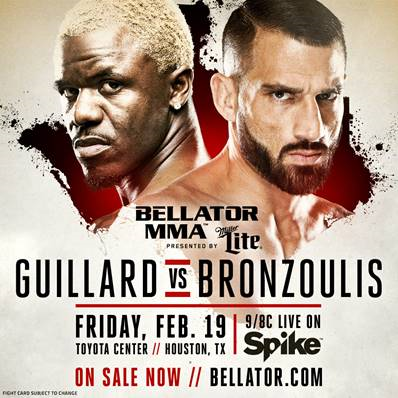 The fight joins a card that already features a double main event — Ken Shamrock (28-16-2) meets Royce Gracie (14-2-3) for a third time and Kimbo Slice (5-2) will fight the man who has been calling him out since their friendship ended years ago, Dhafir Harris, better known as “Dada 5000.” In featherweight action, Emmanuel Sanchez (12-2) will look to continue his torrid pace when he meets Daniel Pineda (21-11). Preliminary contests will be announced shortly.

Guillard suffered a horrific broken hand during his Bellator MMA debut against Brandon Girtz earlier this year. “The Young Assassin” has made it clear that he intends on eventually fighting for the 155-pound title, and his road to the gold begins on Feb. 19 against a tough Houston, Texas native. Of Guillard’s 32 wins as a professional, 23 victories have come before reaching the judges’ scorecards.

Bronzoulis returned to the Bellator MMA fray against a debuting Josh Thomson at “Bellator MMA: Dynamite 1” this past September. “The Greek Assassin” has not shied away from tough opponents throughout his career, having competed against guys like Thomson, Joe Riggs, Gerald Harris and Jorge Patino during his 28-fight career. The Houston native hopes to have plenty of hometown support when he takes on Guillard inside the Bellator MMA cage on Feb. 19.