It appears UFC middleweight prospect Gregory Rodrigues already has his next bout lined up, just one month out from his TKO win over former kickboxer Chidi Njokuani.

It’s quite surprising Rodrigues will be fighting again this early, considering the absurd amount of damage he took 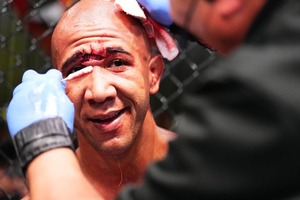 last month at UFC Fight Night 210. You’d imagine there’s no way that nasty gash he suffered is going to heal in time.

But, nonetheless, let’s get into it.

Gregory Rodrigues began his combat sports tenure with Brazilian Jiu-Jitsu, where he became an eight-time national champion in Brazil, as well as a two-time world champion. Rodrigues also trained freestyle wrestling at the Olympic training center, and became a runner up at the Pan American Championships, all before beginning his MMA career.

The Brazilian talent would go 9-3 prior to joining the UFC roster in June of 2021.

Four of his first five wins came via submission, the other coming via TKO. He then won a unanimous decision, before KO’ing his next opponent with a body kick to claim the SG middleweight championship en route to facing Jordan Williams on Dana White’s Contender Series.

Williams would KO Rodrigues in the opening round and get signed to the UFC, only to fall 0-3 within the promotion before being released with a record of 9-6. It’s crazy the improvements someone can make in their career, because if these two were to fight again, it’s highly doubtful Williams would make it out of the first round.

Following this fight, Rodrigues would violently KO Jun Yong Park in round two, before losing a heavily disputed split decision to Armen Petrosyan. However, Rodrigues would rebound with another pair of knockout victories, as he KO’d Julian Marquez, becoming the first man to finish him, as well as TKO’ing Chidi Njokuani.

That was a rough fight for him, he was getting absolutely battered early on. But, he didn’t get discouraged, and he ended up stopping Njokuani, who was 2-0 in the UFC at the time with two first round knockouts, in round two.

Then we have Brad Tavares, who’s been in the UFC since The Ultimate Fighter 11 way back in 2010.

Though Tavares would initially go 7-1 inside the octagon, improving his record to 12-1, he’d go 1-3 over his next four outings. A four-fight win streak would soon follow, before he’d lose another pair of back-to-back fights to current champion Israel Adesanya (UD) and Edmen Shahbazyan (KO).

Tavares is by far the most experienced talent Rodrigues will have faced to date.

By Adam Martin 2 mins ago