This past October, Luke “The Archangel” Staley found himself competing in his second professional mixed martial arts event and it was his first time as a professional competing under the Stellar Fights banner. You would have to search pretty far to find a more contradicting MMA athlete than Fredrick, Maryland’s Luke Staley. Staley doesn’t fit the typical mold of what you would think a mixed martial arts fighter should look and sound like, and he definitely doesn’t keep the day job that most budding MMA fighters keep either.

Staley is well spoken, enthusiastic, and not covered in tattoos or piercings like what you may envision as the stereotypical fighter. Staley is not a bouncer or security guard either. On the contrary, Staley is a vocational minister for the Fellowship of Christian Athletes. Staley adds that “this platform is only a vehicle for me to tell people about Jesus,” but still mentions he’d like to fight for the UFC or Bellator someday.

Staley’s Stellar Fights 47 opponent, Ian Radford, was making his professional MMA debut and making his first trip to the east coast for this fight. Because it was Radford’s debut, Staley’s team had a hard time finding previous fight footage, “so the first round, our job was just the feeling out process” says Staley.

Staley mentioned to MyMMANews that he kept “all his tools sharp” and that he initially planned to “stand and strike with him.”

Radford had a strategy of his own that he intended on using as he initiated contact first with a heavy clinching approach to control the pace of the fight. The ever-ready and sharp Staley was ready for that possibility as well, as he we able to reverse the clinch position, and put Radford against the cage. The two men exchanged some back-and-forth clinch positioning and a few foot stomps before Staley was able to hit an outside trip that put Radford on his back.

“I don’t think I’ve had a fight in the past five years where I haven’t scored a takedown on the fence, so I was really surprised when he clinched up with me,” said Staley when asked about his thoughts on Radford’s clinch.

Staley worked at little before the two scrambled and gave Staley an opportunity to attempt an arm in guillotine choke. After about 40 seconds of that attempt Radford was able to posture up, but again Staley was ready and was able to now attempt a triangle choke. Radford tried to defend the choke as Staley worked to lock up his choke and position his own feet to make the triangle tighter around his opponent. After and few quick fixes and little to no damage on the ground, Staley had the triangle locked in and got the tap in 3:23 of the first round.

Staley sings the praises of his coach Rob McCraw at Bowerhouse MMA for his cage savviness. “His cage IQ for mma is through the roof, it’s kind of remarkable” when getting his students ready for those situations,” Staley said.

“The Archangel” also felt he had to get the job done and even his record as his first professional fight ended with him losing by submission finish. Staley expresses his excitement as he explains his new direction. “I’m going into 2022 off a win, off a first-round finish with an even record.”

Staley also explains “that this sets me up in an okay spot for the trajectory of my career, and the difference between that and an O-2 as a professional is such a huge gap.”

Staley doesn’t expect to be hearing from the UFC just yet as he feels like he still has some work to do and he is just beginning to make some noise at the age of 24. When asked if he thought he was ready, Staley added “Dana White, he likes to sign guys between 26 and 28” and mentioned that Dana White says “guys under 26 as “young” and Dana always mentions guys at 27 and 28 as the “prime” of their career.”

Staley laid out a pair of career scenarios that he could see himself taking and one of his goals is to take two fights per year and collectively take six more fights before he turned 27.

At the moment, Staley is not rushing into his fight career but he has some great connections within his gym that will help him elevate his game when the time comes. He’s very content with his job and even shouted out his passion for Jesus after he won his fight and got his hand raised. He mentions that he’s not taking any fights until after his next big scheduled bout is taken care of first, as Staley is set to marry his long-time fiancé early in January of 2022. A super supportive counterpart who Staley has said has gotten into the sport so much that she now trains Brazilian jiu jitsu on her own. Clearly a match made in heaven and a well-oiled machine, the two will help each other reach new heights.

You can stay up to date with ‘The Archangel’ by checking out his Instagram @lukewaynestaley. 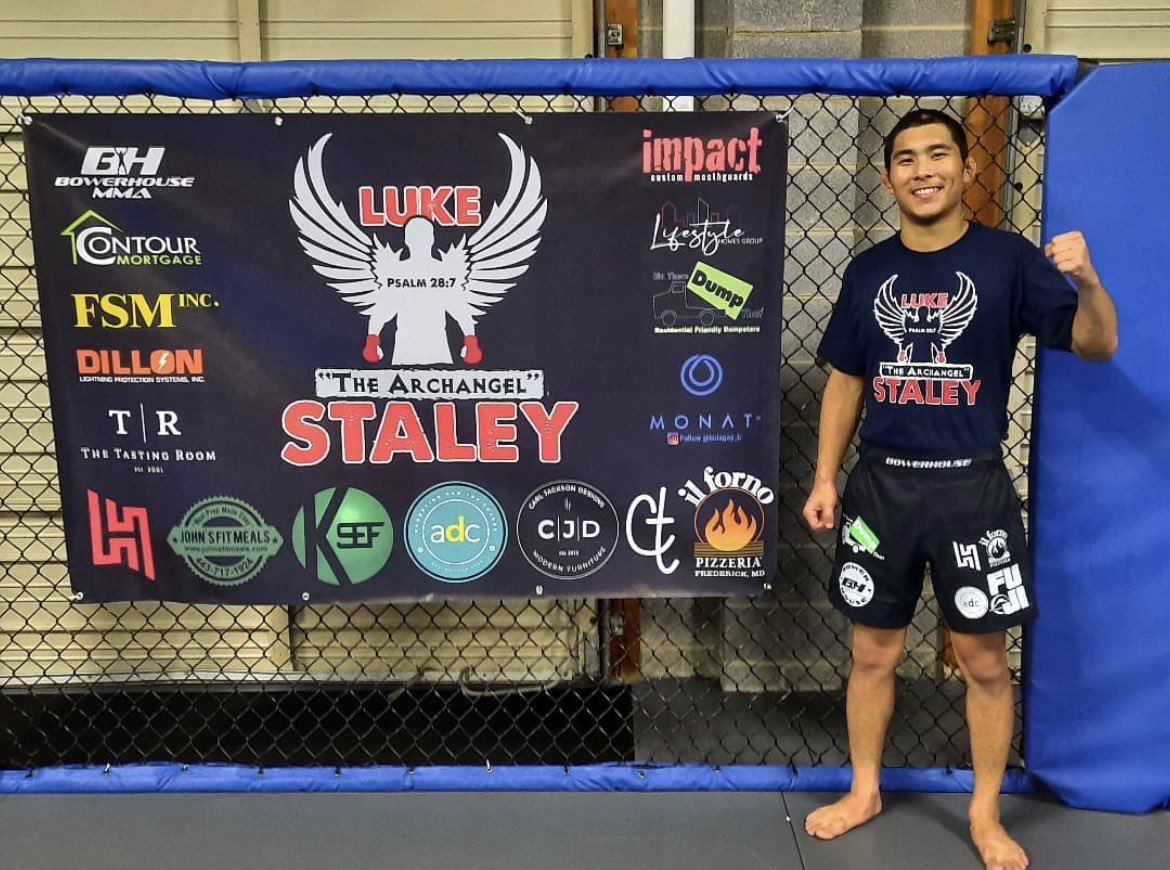