Saturday, May 7 from The Hangar at OC Fair & Event Center in Costa Mesa 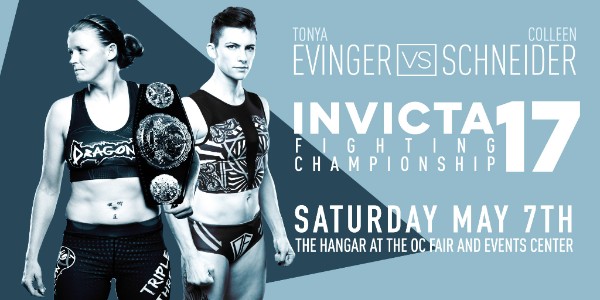 Kansas City, Mo. – Saturday, May 7 will mark the return of Invicta FC to Orange County, as The Hangar at OC Fair & Event Center in Costa Mesa, Calif. once again hosts the mixed martial arts promotion.

In the headline bout of Invicta FC 17, Invicta FC Bantamweight Champion Tonya “Triple Threat” Evinger (17-5) makes her first title defense since winning the belt in July of last year, squaring off against local favorite and No.1 contender Colleen “Thoroughbred” Schneider (10-6).

The champion Evinger enters the contest on an eight-fight winning streak, six coming by way of stoppage, with the most recent being a second-round TKO of Pannie Kianzad at Invicta FC 14. The challenger Schneider is riding her own winning streak, tallying her fourth straight with a decision over Raquel Pa’aluhi at Invicta FC 15 in January.

“When we brought Invicta to The Hangar in January, the house was packed and every single athlete on the card delivered; six out of the seven fights were finished” said Invicta FC President Shannon Knapp. “Now we’re coming back in May and you can bet that we’re stacking the card again for the fans in Orange County who showed us so much love last time.”

Additional bouts for Invicta FC 17 will be announced soon.