The improvements in Charles ‘Do Bronx’ Oliveira’s game have really been something to behold in recent years. This Brazilian contender just won his eighth-straight fight, picking up just the second decision win in his entire UFC career. 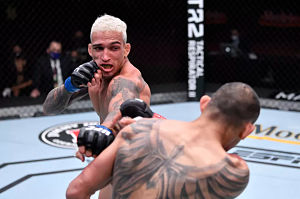 Considering Oliveira has been with the UFC since 2010, that’s absolutely remarkable. He straight up mauled Tony Ferguson last night, it wasn’t a close fight at all. Believe it or not, Ferguson had a better outing against Justin Gaethje.

As Joe Rogan said, it’s not a credit to Ferguson’s fall off, or decline, it’s a credit to the improvements Oliveira has made. Honestly, it’s probably a little bit of both, unfortunately.

The way he just manhandled ‘El Cucuy’, no one’s done that before. Considering Ferguson was a high school state wrestling champion, a three-time All-State in high school, an NCWA National Champion, a two-time NCWA All-American, and a two-time North Central Conference Champion, it’s pretty crazy seeing someone out-wrestle him and out-grapple him in that manner. 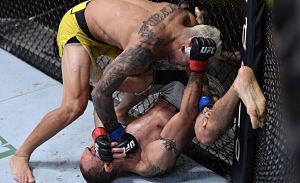 Not to mention, he’s a Brazilian Jiu-Jitsu black belt under Eddie Bravo. ‘Do Bronx’ just did that to an Eddie Bravo black belt, let alone someone like Tony Ferguson, it was really a sight to see.

Oliveira almost kept that finish streak going, and if round one had a couple more seconds, he would have. That armbar he had ‘El Cucuy’ in was nasty, there’s no way in hell he was getting out of that. It just got tighter and tighter, and Ferguson’s arm was about to snap.

We all knew how tough and durable Ferguson is, but this showed us even more so. He was one-hundred percent willing to have his arm broken last night, and though his arm was merely useless after round one, he still never quit, and kept from being submitted in the next two rounds. 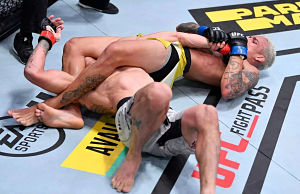 It’s kind of surprising that people expected Ferguson to have the advantage on the feet. He’s a good striker, yes, but so is Oliveira. Though he’s always had good striking, ‘Do Bronx’ has had issues taking his opponents best shots in the past.

That hasn’t been an issue for him lately though, as not only is his striking improved, more so than anything he’s just become more dangerous with it.

He still does the same things, he still throws the same strikes, but he believes in his ability on the feet now, and it’s given him this eight-fight win streak.

We first saw these drastic improvements on the feet when he fought 39-1 professional kickboxer David Teymur, who he almost TKO’d in round two, but decided to jump on Teymur’s neck for the finish instead.

Oliveira has always been as dangerous on the mat as anyone in the sport, but now with his striking having evolved so beautifully, and his wrestling has really come along as well, it’s a wonder who could beat him at this point. His body lock slams were impeccable last night, and last night wasn’t the first time we’ve seen him use them. 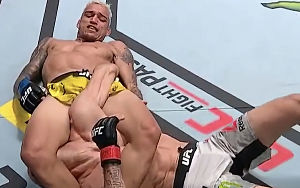 Normally he’s able to submit his opponents rather quickly after getting them down, that’s just a credit to his opponent, who also nearly got triangled in round two.

Oliveira may not look strong, and he wasn’t so much before, but he’s 31-years-old now, he’s got that man strength at this point in his life, and it shows. Ferguson certainly isn’t the only opponent Oliveira has manhandled, but he is the best fighter he’s done it to.

The scorecards read a universal 30-26 for Oliveira, but really, that doesn’t do it justice. All three of those rounds could have been 10-8’s, there couldn’t have been much of an argument either, this was as dominant as he possibly could’ve looked. 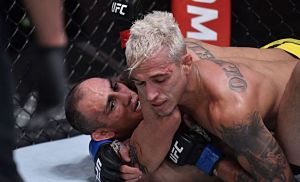 This brings up the question, is Charles ‘Do Bronx’ Oliveira the best lightweight in the world?

Many of us thought for a time that ‘El Cucuy’ would be the man to give Khabib Nurmagomedov the most trouble, but with how good Oliveira is on the mat, and now his striking, it seems as if wrestling is the only area Nurmagomedov would have the advantage.

Does anyone remember when Nurmagomedov fought Dustin Poirier at UFC 242? That third round where Poirier had the champion in a very tight guillotine choke, if Poirier can get that close to finishing Nurmagomedov, Oliveira probably would have been able to finish it, should he have been the one holding the choke. 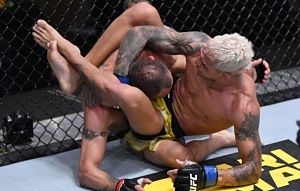 After absolutely mauling the No. 3 ranked lightweight contender, the only way to go for him is up. How does ‘Do Bronx’ match up with Dan Hooker? How does he match up with Dustin Poirier, or Justin Gaethje, Conor McGregor, or better yet, Khabib Nurmagomedov?

Dana White said the winner of Ferguson versus Oliveira may get the next title shot. Nurmagomedov retired after defeating Justin Gaethje in October, because there were no new faces for him to fight, amongst other reasons of course.

Ferguson had just lost to Gaethje, Nurmagomedov ran right through Gaethje like a hot knife through butter, and the biggest lightweight booking was Conor McGregor versus Dustin Poirier II. He’d expressed how he already defeated, and submitted both of them, and isn’t interested in rematching either of them. 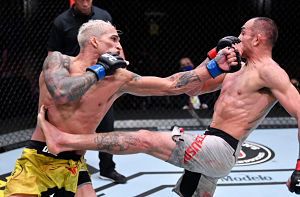 Who can blame him for not wanting to come back for a name he already has? Now he has a new name, a new face, a potential new opponent. This is one of the most exciting match ups in the entire sport, Khabib Nurmagomedov versus Charles Oliveira. This would make the Nurmagomedov versus Ferguson curse a little better, slightly.

We thought Gaethje’s striking may be too much for Nurmagomedov, and it wasn’t. Those leg kicks were starting to effect him, but he was able to get the takedown, and then the submission victory. That’s not going to happen against Oliveira, he’s not submitting him.

Oliveira has been submitted three times in his career, every one of them was incredibly surprising, but one happened earlier in his career to Jim Miller, which he avenged with a submission of his own, and the other two were bouts contested at featherweight, where he just wasn’t himself.

Not to mention, all three of them (Jim Miller, Anthony Pettis, Ricardo Lamas) are high level BJJ black belts, and it wouldn’t happen again. He proved that when he rematched Miller. 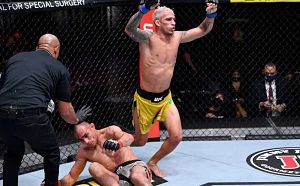 It’s always great seeing young talents that come to the UFC and deal with adversity, but overcome it as they get a little older.

Dan Hooker is a good example of that, as is Rafael dos Anjos. Oliveira has taken so much damage in his career, and he’s still blossomed into one of, if not the most elite 155 lb fighter in the world today.

It’s honestly hard to see him losing at this point, as it’s just as hard to imagine Nurmagomedov losing, Oliveira’s looked so incredible as of late. He’s always had all the skills, but growing further into adulthood has really changed him for the better. Oliveira improved his record to 30-8 (1 NC) with his victory last night.

Is Charles ‘Do Bronx’ Oliveira the Best Lightweight in the World?