Jake Skelly is a well-rounded mixed martial artist.  He believes in all facets of the sport, but in the end Skelly feels that striking is the most important tool followed by takedown defense.  He’s aiming to tighten up his game in the cage by working his striking in the ring at USKA Fight Night, coming up on August 19th at the legendary venue in South Philly, the 2300 Arena. 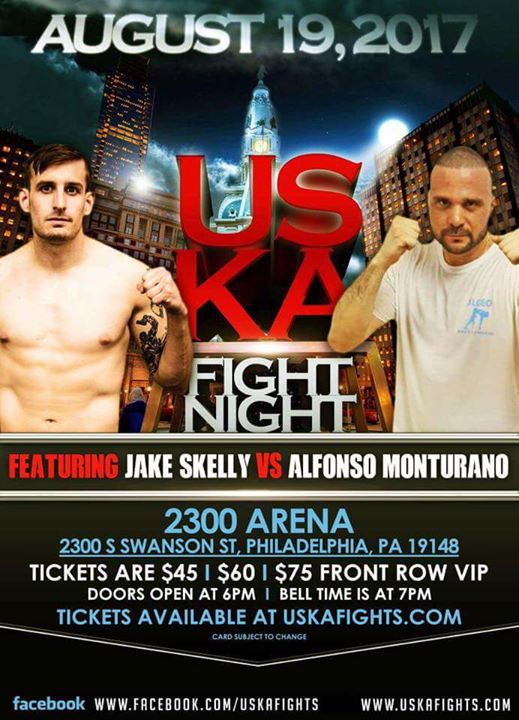 Irv Althouse, and Jen Heffentrager have been hosting some of the most exciting regional muay-thai events that we’ve seen. They bring their matchmaking talents to the City of Brotherly Love next weekend. We will be ringside bringing you up to the minute results and amazing pictures.

Jake has been busy building his Hands Up Studios across the bridge in South Jersey, as well as putting together a formidable team of fighters who work hard and learn together. When I visited his facility, he insisted on putting me through a workout and smashing some pads. It was a great time.  Now, Skelly is the fighter, not the trainer, and he’s excited to work with Irv, whom he respects and admires.  Jake’s goal is not just to compete and win regionally, but for him and his team to gain confidence and success on a national and international level.

Following Jake on social media, I’ve seen him and his team traveling to numerous facilities and working with some of the most talented people in the business like Aaron Meisner at Royal Striking and the guys Level Up Boxing and Fitness.  He’s been in the sport long enough to know you have to take care of business outside of the ring before you have success inside.

I chatted with Jake about his path and his upcoming fight at USKA with his opponent, Alfonso Monturano.

By Cole Shelton 12 mins ago