Interview with Jaleel Willis above

Currently sitting outside the top 10 of the 170-pound division, Willis respects Jackson’s journey to being ranked No. 3. In less than two years, Jackson rattled off four-straight victories in less than two years, including wins over Jordan Mein, former UFC lightweight champion Benson Henderson and Neiman Gracie.

With Willis being on a five-fight win streak and unbeaten under the Bellator banner, Willis is looking to take a similar path this year. His 2021 campaign starts with a clash against afellow former Legacy Fighting Alliance welterweight champion in Maycon Mendonca at Bellator 259 on May 21.

“I think I got a lot more work to do to solidify myself, so I can be up with names like Jason Jackson,” Willis said.

“I watched his journey and that’s a lot of the reason I’m so motivated to get up and run heels, he needs to check them right now, he works hard all the time, He deserves everything coming his way.”

Willis made his first promotional appearance with a unanimous decision win against Omar Johnson at Bellator 162 in October 2016. Between his first and second stint with the promotion, the 29-year-old fought five of his eight bouts inside the LFA cage.

He captured the welterweight title with a unanimous decision win over Vinicius de Jesus at LFA 88 last August. In his next appearance, Willis kicked off his second stint with Bellator by defeating Mark Leminger via decision at Bellator 253 in November.

Before Willis, Jackson fought under the LFA banner between his two stints with Bellator. Jackson captured the 170-pound strap with a split decision nod against Hemerson Souza at LFA 71 in December 2019.

Jackson’s second Bellator bout did not go as well as Willis’ did. Jackson dropped a split decision to Ed Ruth at Bellator 231 in October 2019. He rattled off four-straight wins since then.

Willis is still awaiting his chance to sign on the dotted line against higher-ranked opponents.

“I’m right where I need to be, probably like No. 11 or something like that.” Willis said. “I feel like I would need to fight one of those top-ranked guys to solidify myself as top 10 completely.”

Willis and the rest of the division

Willis found himself ranked 10th at welterweight in Bellator’s inaugural rankings back in March. With his last fight taking place last November, Willis dropped outside of a top 10 spot.

There’s a lot of moving parts at 170 pounds. The reigning champion Douglas Lima is slated to defend his strap against Yaroslav Amosov at Bellator 260 on June 11. Michael Page and Paul Daley all recently picked up victories over fellow-ranked welterweights.

Daley is slated for a 175-pound catchweight with Jackson the same night of the title bout at Bellator 260. Oliver Enkamp and Joey Davis, who are ranked at No. 10 and No. 7 respectfully, have not fought since 2020.

Willis sees where he stands in the division and expects a top opponent to come his way soon.

“It’s mostly exciting for me because I don’t know which one of these guys could end up across from me. It’s like all of them are like an overload of experience and are a huge task to prepare for,” Willis said. “I feel like once I got whoever I am it is I am supposed to get, that’s when I can evaluate everything I need to do to be able to go in and take care of business.” 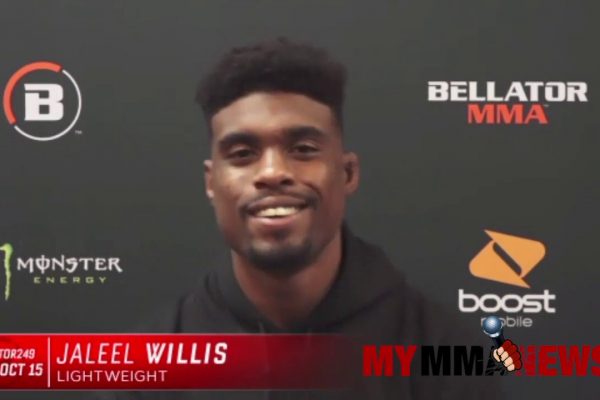 With a brief go at lightweight, Willis is completely committed to 170 pounds. The Tennessee native is introducing more strength training to his regimen, building on his welterweight frame.

Willis will welcome a newcomer in Mendonca at Bellator 259. It’s a top 10 opponent, but Mendonca is on a five-fight win streak of his own.

With a win, Willis is expecting his name to start moving up the ranks.

“I am about to beat up these boys,” Willis said. “I want to solidify myself as one of the top prospects and one of the top fighters in the world. Those rankings really can show a good idea of who I need to beat to get there.”

By Staff Report 8 mins ago