HOLLYWOOD, CALIF. (January 24, 2017) – Bellator & BAMMA combine forces once more to bring Belfast a show of Titanic proportions as they present their second co-promoted event on Friday February 24th 2017 from the SSE Arena, Belfast. With huge main events and supporting undercards, it will be a historic and groundbreaking night to remember for MMA fans of Belfast and around the world.

Tickets for the joint-event start at just £35 and can be purchased at Ticketmaster.ie, SSEArenaBelfast.com, or the SSE Arena box office. 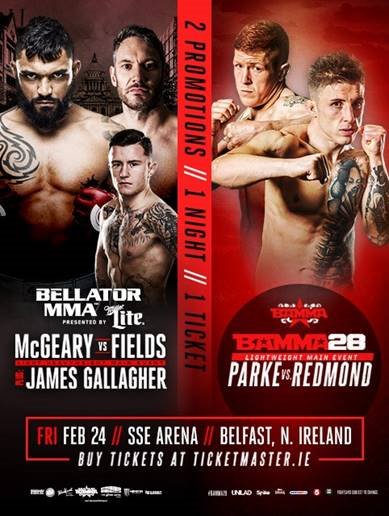 “We had a great time working with David and the BAMMA team in December for what was an incredibly successful Bellator debut in Dublin. We’re looking forward to heading north with them to Belfast for another amazing co-promotion that will feature some of the world’s best fighters.” – Scott Coker, Bellator CEO

“The addition of Bellator to the show in Dublin was a great experience and the perfect end to a year of great events for BAMMA. We are therefore very pleased to welcome them back as part of the package for what will be an exciting night of MMA for the fans in Belfast in February” – David Green, BAMMA CEO.

With both fight cards being announced over the coming weeks, further information on the headline bouts can be found below.

Hailing from Andover, England, the 34-year-old Liam McGeary (11-1) will make the short trek up to Northern Ireland’s capital for the first time in his career, where he will once again compete in a main event. The former Bellator MMA light heavyweight champion will enter the cage for the 10thtime under the Scott Coker-led promotion, where he has posted an 8-1 record with seven finishes. Following an 11-fight winning streak to begin his professional career, McGeary finally experienced the sour taste of defeat, when Phil Davis wrestled the title away from him at Bellator 163. McGeary has consistently proven to be one of the most dangerous strikers and submission artists in the 205-pound division, finishing his victim in 10 of 11 career wins, including eight in the opening frame. Much like the “RMS Titanic,” which was built in Belfast, McGeary hopes to sink Fields when the two take center stage inside The SSE Arena on February 24.

A native of Dublin, Ireland, Chris Fields (11-7-1) will also have a short trek to Belfast when he enters the cage on February 24. “The Housewives’ Choice” will be making his Bellator MMA debut, following nine years under the direction of local promotions, including three appearances under European powerhouse BAMMA. After competing at middleweight in 2015, the 33-year-old Fields returned to the light heavyweight division, recording a first round submission victory over Dan Konecke at BAMMA 24. Fields has tallied finishes in each of his 11 career wins, making him one of the most menacing opponents for anyone standing in his way. Now the SBG Ireland product will look to make a splash in his first fight with Bellator MMA, as he prepares for the former division kingpin.

Hailing from nearby Straban, Ireland, the 20-year-old James Gallagher (5-0) is one of the brightest stars in all “The Emerald Island.” At age 15, “The Strabanimal” moved away from home to join Coach John Kavanagh at Straight Blast Gym (SBG), where he now trains alongside the best fighters in the country including Connor McGregor. Having made his Bellator debut in London this past July in London, Gallagher followed up in December with a submission victory over Anthony Taylor in front of a raucous home crowd at the 3Arena in Dublin. Gallagher now takes on Kirill Medvedovsky (7-3) in the co-main event of the evening.

Another top prospect from the famed SBG powerhouse, Sinead Kavanagh (4-0) returns to the Bellator cage against 32-year-old Parisian Iony Razafiarison (1-1, 1 NC) in a 140-pound catchweight matchup “KO” Kavanagh, who fights out of nearby Dublin Ireland will no doubt be looking to collect her third knockout on February 24.

“Stormin” Norman Parke (22-5-1) from Bushmills, Antrim is no stranger to BAMMA events, as he has been spotted numerous times cornering team mates as part of the Next Gen Northern Ireland fight team. One of Europe’s most sought after free agents prior to putting pen to paper with BAMMA, Parke now goes in pursuit of the coveted BAMMA World Lightweight title.

Paul “Redser” Redmond (11-6) landed a victorious homecoming of his own at BAMMA 26, as Redser took out the double tough Chris “The Menace” Stringer to claim the adulation of his hometown support. Redmond now steps into one of the biggest fights ever announced in Ireland, as he takes on Parke in this hugely anticipated match up.

For further information check out the Bellator and BAMMA websites and follow them on all social media channels.