How It All Began: 16-Year Old Jeremy Stephens wanted to “Knee Somebody in the Face”

Jeremy “Lil’ Heathen” Stephens has been fighting in the UFC for the better part of a decade. He has had 23 fights in the organization, and his 24th will be the biggest fight of his career.

Stephens (25-12), ranked #7 in the UFC featherweight division, will take on another veteran with 20 fights on his UFC resume, the #2 ranked Frankie Edgar (20-5-1). The fight is scheduled to take place on November 12th at UFC 205, from Madison Square Garden, and will be the featured fight on the FS1 preliminary fight card.

Before he becomes one of the first MMA fighters to grace the cage inside the mecca that is MSG, even before UFC 71, when he made his UFC debut in May of 2007, Stephens’ road to the octagon began in a fashion that is accustomed to the style he fights in, with passion and ferocity.

“It stemmed from my childhood. I was into a lot of mixed martial arts movies, such as Van Damme, watching Ninja Turtles,” Stephens said.

“I was wrestling at a young age, and growing up, my parents separated. I went through a little rough patch where I was switching schools a lot. I spent a lot of time with my grandfather who passed away in 2004. My grandmother (and grandfather) they always took care of me, they had a good stable home so I spent my time over there. My uncle, he wrestled through elementary, all the way up through college. So spending my time over there, I got attracted to the UFC, old school UFC like Mark ‘The Smashing Machine’ Kerr, Tank Abbott. My grandfather, he was big into the fighting videos because they had wrestling. But overall, it was the fighting and it was exciting. I didn’t really know what it was at the time, but man, I was so deeply attracted by it, it just excited me! I was like, ‘Man, I want to knee somebody in the face, I want to get in a fight like that’. This is some thing I felt like was my calling.”

“I used to watch these videos obsessively, over and over, even the same tapes,” Stephens continued.

“This was around 4th & 5th grade that I saw these tapes, and growing up I saw the documentary of Mark “The Smashing Machine” Kerr over in Pride, it’s a great documentary and I felt bad for the guy. Just the fighting in general was something I really wanted to do.”

It is one thing to talk about becoming a fighter while going through the educational system. It’s another to have your first fight against a grown man, while you’re in high school. Jeremy Stephens, took option B.

“Josh Neer was a huge mentor of mine, and I didn’t know him at the time. When I was 16, my grandfather, who was a great guy, he would shake everyone’s hand, he’d get along with everybody. He invited me to come to this bar, and I couldn’t even get in. With him being so cool, and having some pull, I got in there and just sat and watched these guys fight. I felt like some of these guys were matched up with a lot weaker opponents and guys that they knew they could beat, kind of showing off. I was like man, I really want to do this.

“I came back, and the next week, I was 16 years old, I fought and I won,” Stephens continued. “Right then and there, I got addicted. It was my first fight, I was still in high school, fighting grown men. It just became an obsession for me. It really takes off from there.” 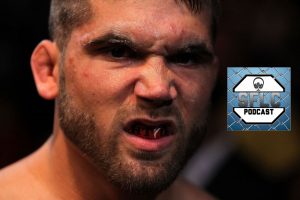 As Stephens prepares for the biggest fight of his career, his 24th, on the biggest fight card of all time, he remembers taking a different path into the world famous octagon. While most fighters have an established base in the martial arts world before becoming a fighter, Stephens took the road less traveled and did the exact opposite.

“Through fighting, I always say, ‘I’m a fighter first, who learned mixed martial arts.’,” Stephens said. “Because a lot of people come in the game, they have some type of background like jiu-jitsu, or karate, or their dad got them into some sort of mixed martial art. I just came in with just pure street fight-ness and mental toughness. I never had any of that knowledge. I’m a fighter who learned mixed martial arts. It helped me discipline, and take that mindset into a more direct, positive approach into the game. It just really carried me a long ways.”

If there is one thing we have learned throughout the career of “Lil’ Heathen”, is that he is always looking to end a fight early. His style may have evolved, but his mentality has never changed.

“When i got into the UFC, I was so young and green still,” Stephens said. “Honestly, throughout my career, I just had a lot of heart, balls and heavy hands that just got me through. I was really just a tough, scrappy kid. I didn’t really have any background other than street fighting and mental toughness and taking that to the cage with me. I feel like I can beat a lot of these guys with just toughness, and I hit hard as f**k. I’m mean, I like to be mean inside of the cage. If I get hit, I want to hit you twice as hard. I want to ruin your night. That’s just the savage that grew up with my mentality.”

Will the savage mentality of Jeremy Stephens have an answer for Frankie Edgar? We will all find out on November 12th as history will be made at Madison Square Garden.

By Chinyere Okafor 5 hours ago