A legend says farewell in Sacramento; Urijah Faber to walk away

Elite athletes battle for a boost in the rankings as UFC® returns to Sacramento for the first time in three years on Saturday, Dec. 17 at UFC FIGHT NIGHT®: VANZANT vs. WATERSON, live on FOX from the brand new Golden 1 Center. In the main event, No. 8 Paige VanZant, who is coming off an impressive highlight reel knockout of Bec Rawlings, takes on seasoned veteran and No. 12 ranked strawweight, Michelle Waterson. Additionally, mixed martial arts legend Urijah Faber says goodbye to the sport he dedicated his life to in front of his hometown fans when he meets fellow bantamweight pioneer Brad Pickett.

As the fifth youngest fighter currently competing in the UFC, VanZant (7-2, fighting out of Sacramento, Calif.) is considered to have one of the brightest futures ahead of her. Most recently placing second on Season 22 of “Dancing with the Stars,” her performances outside the Octagon® prove to be as impressive as they are in it. “12 Gauge” hopes to show off her well-rounded game and follow up her highlight reel knockout of Bec Rawlings while protecting her home territory this December. Waterson (13-4, fighting out of Albuquerque, N.M.) will look to extend her win streak to eight with her versatile attack. “The Karate Hottie” has finished 11 of her victories, eight by submission and three by knockout, with seven of those coming in the first round. 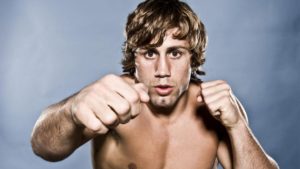 Sacramento fans will have the opportunity to give Faber (33-10, fighting out of Sacramento, Calif.) a hero’s send-off in the city he put on the MMA map with the creation of his powerhouse gym, Team Alpha Male. A legend in the sport and the one who paved the way for those in the lighter weight classes, “The California Kid” will be determined to deliver a win in his final Octagon appearance and leave with his spot amongst the greatest to ever do it cemented atop the list. Hoping to spoil Faber’s final walk will be the heavy-handed Pickett (26-12, fighting out of East London, England). The Brit has competed in four different weight divisions and has amassed 18 finishes as a pro, living up to his “One Punch” moniker. With Faber being the only man to beat current bantamweight champion Dominick Cruz and Pickett one of the few to beat the best pound-for-pound fighter in the world in flyweight champion Demetrious Johnson, look for sparks to fly between the two at the 135 pounds.

Plus, two of the sport’s top prospects attempt to propel themselves into the rankings as Sage Northcutt (8-1, fighting out of Katy, Texas) takes on fellow Dana White: Lookin’ for a Fight® alumnus Mickey Gall (3-0, fighting out of Green Brook, N.J.). Northcutt, the youngest fighter on the current UFC roster at 20, seeks to add another finish to his already impressive slate of four wins by KO and three by submission. The 24-year-old Gall, who comes off a high profile win over CM Punk, will attempt to secure another first round submission to his growing résumé. The athleticism and potential of both fighters will make for an explosive battle in Sacramento.