No one ever asked Jessica Eye if she was OK.

At least that is how the women’s flyweight contender sees it after back-to-back failed weight cuts. Eye received negative criticism from around the internet for missing her mark, including from her next opponent, Joanne Calderwood, who she meets at UFC 257 in Yas Island, Abu Dhabi on Jan. 23.

Eye recalls a plethora of reasons for why people faulted her for missing weight, but there was a deeper issue looming in reality.

A problem she herself did not understand at the time. Following her unanimous decision loss to Cynthia Calvillo at UFC on ESPN 10 in June, she realized her gallbladder was part of the issue.

She then had it surgically removed in August. On top of all this, the Ohio native confirmed she is allergic to eggs and dairy, as well as learning she suffers from irritable bowel syndrome.

Just seven months after her last defeat, Eye finally understands her body. She also realizes another truth regarding the people who criticized her during that time.

“I’m definitely a little pissed off and I have some things I have to prove to myself and some silent treatments to be giving,” Eye said.

“I got bullied before anyone asked if I was sick. I got bullied about saying I’m fat and I don’t do these things. You’re calling someone who has my accolades, you call me fat? So what do you think other people have? It’s just repulsive.”

According to Eye, her gallbladder was working at just nine percent when she had her surgery. After having it removed, she found even more trouble with struggling to recover.

Eye even posted for help on Instagram, asking for any information on how to recover from her surgery in September. From there, she traveled from Las Vegas to her home state of Ohio to recover at the Cleveland Clinic for a month.

“Most people get theirs removed at 50 percent function, just normal. I was at nine percent. It was almost fully dead and poisoning my body on a regular basis,” Eye said. “Now knowing what I know, I’m proud to be doing things better and to be feeling so much better. “

For the first time in a long time, Eye understands her body. It is not all perfect though since irritable bowel syndrome will continue to be a challenge for the rest of her life.

The 34-year-old is still doing her part, finding the correct foods she can eat. It is no easy task, trying to get around foods she is allergic to and understanding the foods she needs to avoid because of irritable bowel syndrome.

“From all of October, all of November, those months were just built on food,” Eye said. “All it’s been about is everyday food journaling, finding out what foods hurt, what foods foods I got to take out, what foods I am allowed to take back in.”

The eye of the storm

Eye is also welcoming another change to her everyday life. She is learning to block out negativity from fans, media and other fighters.

The beef between Calderwood and Eye stems from a back-and-forth Twitter argument in June. Calderwood criticized Eye for missing the 125-pound mark for the second time.

Although Eye may have been offended in the past, she claims she is tougher to get to these days.

“If that’s what she needs to do, I don’t think it’s in her best interest,” Eye said. “I am really good at putting people to sleep when they talk [expletive] to me a lot.” 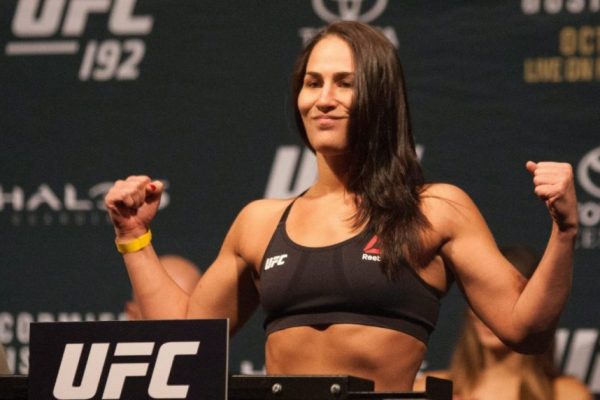 Memories of her last weigh in are filled with humiliation. She is tired of feeling this way.

Eye’s next fight is for herself. After a tough 2020 which included surgery and other setbacks, she is approaching the new year with a fresh start.

“My bad moment made other people more enjoyable because people enjoy hate,” Eye said. “I just won’t do it simply anymore. I just won’t let it bother me.”