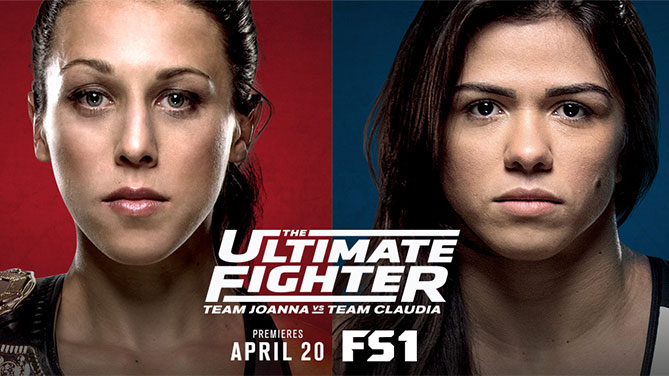 The Ultimate Fighter® will put mixed martial arts’ global dominance on display again as UFC® strawweight champion Joanna Jedrzejczyk will coach opposite No. 1 contender Claudia Gadelha. The coaches will lead a group of eight light heavyweights and eight strawweights who will compete for a UFC contract and the title of The Ultimate Fighter.

The Ultimate Fighter®: Team Joanna vs. Team Claudia will kick-off on FS1 on Wednesday, April 20 with a two-hour season premiere airing at 10 p.m. ET as 32 competitors fight for one of 16 slots – eight in each weight class – available to be coached by two of the sport’s best. The season will continue with 11 one-hour shows Wednesdays at 10 p.m. ET. The series is the highest rated and most watched original program since the network’s inception in August 2013.

Poland’s first UFC champion, Jedrzejczyk (11-0, fighting out of Olsztyn, Poland) stormed onto the scene in 2014 with her first Octagon® appearance. Since then, she’s gone on to win five straight, won the strawweight title, cemented her place on the top pound-for-pound list and is widely considered as one of the best strikers in the sport. She’ll now lend her expertise to the next generation of athletes who hope to follow in her footsteps and one day wear UFC gold themselves.

Gadelha (13-1, fighting out of Rio de Janeiro, Brazil) trains at the renowned Nova Uniao gym, home to former champions Jose Aldo & Renan Barao. The Brazilian jiu-jitsu specialist hopes to get another crack at current strawweight champion, Jedrzejczyk, who provided Gadelha with the only blemish on her record – a three-round split decision loss in late 2014. Their contrasting styles should provide for an entertaining season between the two teams. The Brazilian’s comfort zone is on the canvas and will provide a stark contrast to the Pole’s highly skilled striking attack brings a completely different skillset to the show.

The series culminates on live on FS1 Friday, July 8 in Las Vegas as part of International Fight Week and will be headlined by Jedrzejczyk and Gadelha in a championship bout for the strawweight world title.