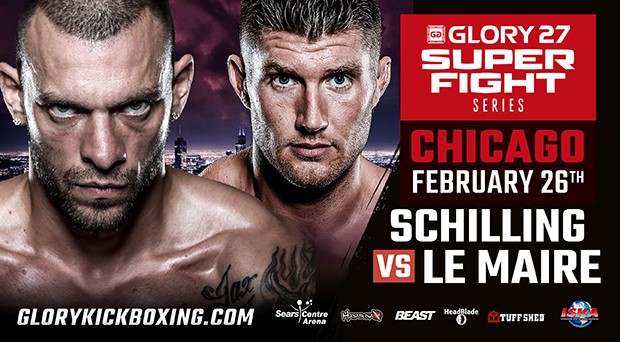 Lemaire was previously scheduled to compete later in the evening, as part of the one-night, four-man North American Middleweight Contender Tournament at GLORY 27 Chicago. In his place, GLORY newcomer Karl Roberson will step in to face No. 4 ranked middleweight Dustin “The Hanyak” Jacoby (7-6, 5 KO) in the opening round of the one-night tournament. Jacoby enters the bout on a three-fight winning streak.

“Schilling stepped up on short notice to headline the SuperFight Series, adding another fantastic fight to an already strong card” said GLORY CEO Jon Franklin. “Being able to add a fighter of Joe’s caliber to this event is a special treat for the fans. It’s a credit to Mike Lemaire for recognizing this opportunity and seizing it as well.”

The five-fight cards for GLORY 27 Chicago and GLORY Super Fight Series Chicago can be found below:

The official air time for GLORY SuperFight Series Chicago will be announced at a later date.

Tickets for GLORY 27 Chicago and GLORY SuperFight Series Chicago are priced at $200, $100, $60 and $35. Tickets are available for purchase at searscentre.com and the Sears Centre Arena box office.