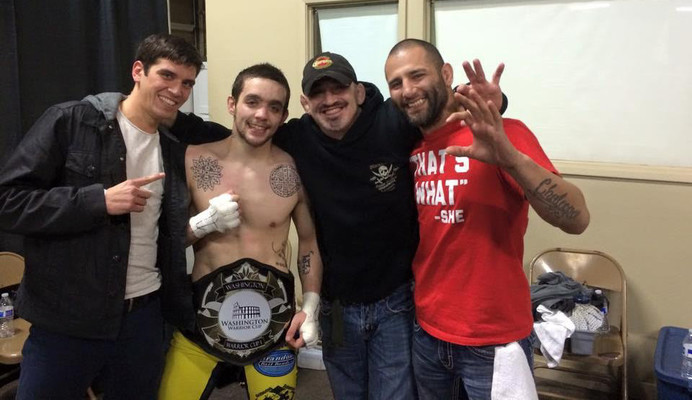 Seven years ago, Joey Elzea had no intention of fighting. It was nowhere near his radar. He was just a typical 21-year-old, except he was overweight. Elzea was also bored with his workout routine so his mom, who was working at a fitness studio at the time, told him about one of the employees who was a professional fighter and looking to teach more classes.

At the time he was more of a casual MMA fan and he had no intention of fighting. But he was given the chance to grapple during the first class and that changed everything.

“Immediately after the first time I grappled I knew that I wanted to fight.”

The gym Elzea was training at only had classes twice a week and he wanted more time on the mats so he found a gym by his house and started training as much as he could.

Since then Elzea has been on a tear as a fighter. He went 9-3 as an amateur and his success continued as a professional, as he is 4-0. Now, he has turned MMA into his life, so much so that it’s hard for him to remember what life was like before it.

“I didn’t really have that much planned for my life. It’s hard for me to remember where I was at the time since MMA has kind of taken over a big portion of my life.”

And now it’s his sole focus. He has a part time job to help pay the bills but would like MMA to take over that responsibility. Though he’s not sure what his end goal is.

“I came into this like I said without ever really expecting to fight in the first place. So now that I’m in it, I don’t really know what my end goal is. I’m just trying to see how as far as a I can get. Trying to get as good as I can and see where it can take me. It’s really cool where just to be where I am now. I didn’t really expect to be a professional fighter and now, I’m given the opportunity to travel and fight so, in a sense that kinda surpassed all the expectations that I had to begin with.”

Most fighters don’t have an attitude of “we’ll see”, especially with an undefeated record like Elzea’s (4-0). Most fighters, including many amateurs think they will make it to the UFC and become the best fighter in the world. But Elzea considers himself a realistic person who makes decisions based on logic and not on blind arrogance.

“I’m kind of an analytical person and break things down. If you use logic and analysis on everything that you’ve see around you, I don’t see how you can be 100. Cause I see that too in the sport with so many people who a hundred percent believe they are going to be UFC champion. I don’t know where the confidence comes from. Like I said before, anything can happen.”

He specifically believes his analytical mind helps him with his grappling, which has been showcased many times in his fights.

“I think that plays a role in getting good in grappling as well, being able to analyze, grappling is such a technique based and problem-solving thing.”

Elzea looks to solve another problem in the form of Ryan Dela Cruz at Destiny MMA on June 23. Elzea will make the trip to Hawaii alongside his Charlie’s Combat Club teammate Tycen Lynn. Elzea hasn’t traveled for his fights before and won’t be able to enjoy the beautiful state since he has to go back to work two days later.

The 28-year old is taking the fight at bantamweight instead of his natural fighting weight of flyweight because of the lack of fighters in that weight class. As previously mentioned, Elzea is traveling with his teammate Lynn who is fighting former UFC fighter Louis Smolka, though he is happy for his teammate, Elzea wishes he got the fight with Smolka.

“I was really sad actually. Tycen was supposed to fight someone else. He was matched up to fight a different guy before that. We both agreed to our fights and everything. And then for whatever reason, the promoter, there was some kind of issue that arose with the other guy, I have no idea what it was with the other guy. Then they suggested Louis Smolka, I guess he was talking to them at some point. I immediately was like, I want to fight him, me! me! me! And my friends tried to talk to the promoter but they had already agreed to fight me and I already agreed to fight and I’m sure it would’ve been an annoying match to have to deal with.”

“But yea, I really wanted that fight, but I’m still happy for my buddy.”

But Elzea has put all of his attention towards Dela Cruz. Elzea describes his as a Hawaiian kickboxer with good takedown defense and that he hits really hard.

Elzea said he has run the simulation of the fight in his head “7,000” times and still can’t figure out how it will end.

No matter what happens in this fight, he knows what his next step is, he plans on defending his belt at Dominate FC.

And for someone who was out of shape and never had any plans of fighting, it’s in his words: “it’s pretty crazy.”