Photo by Amber Ring of A. Ring Photography

Kris “The Badger” Gratalo speaks with Adam Crist of MyMMANews.com ahead of his Global Proving Ground (GPG) 21 professional debut against Darren Costa.

This will be Gratalo’s first fight with Global Proving Ground.  The Badger assumed a 7-2 amateur career with all of his wins coming by way of decision.

Gratalo states that he has been out of the fight game for 14-months but that ring rust should not be a factor as he has had the best training partners and camp in preparation for this fight than he has ever had.

“It’s really just been difficult in getting a fight,” Gratalo said.  “I’ve had five different fights fall off in the last 14 months…… I had a guy fall off on me, and that was a pro-contract that was signed and you know I really wanted to go pro to get away from that whole amateurs falling off, being able to pull out of the fight for no reason whenever they wanted to and go figure the first guy that I get lined up with, he ends up signing his contract, sitting on it for a month and then he’s nowhere to be found now.”

Gratalo also speaks about the origins of his nickname which was shortened from the “Honey Badger” to “Badger,” and his affiliation with American Top Team and former UFC heavyweight Carmelo Marrero.

GPG 21 will be held at the Event Center located at 1444 Rt 73 Pennsauken, New Jersey and you can purchase tickets at GlobalProvingGround.com 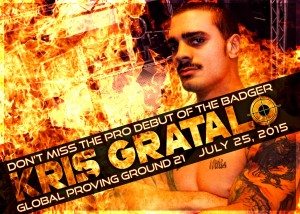