In the first round, Castro came out guns blazing as he went on the attack against the American Top Team – Whitestone 170 pound fighter. Castro earned an early takedown in the first round and controlled the majority of the three-minute round.

Round two started with pressure applied by Castro, as he fought diligently for a takedown. He eventually scored a takedown via slam at about the half-way mark of the second round. Creed wasted no time climbing to a wrestling referee’s position. The champion slid off the challengers back onto his hip, where Creed eventually reversed the champion. The second half of the round was Creed attempting to submit The East West MMA fighter. Round three was a complete take over by Creed. After landing several head strikes, the challenger scored a takedown of his own and controlled the remainder of the bout.

Throughout the fight, Creed fought with focus and patience. The ATT-Whitestone fighter displayed a great amount of maturity inside the cage for an amateur fighter. Creed won a split decision victory over Castro via judges score 29-28, 29-28, 28-29. Creed became the new welterweight KTFO champion with his fourth amateur MMA win, improving his record to 4-1.

In the co-main event, Irvin Averbukh went to work through three rounds on Lee Rasanen before he eventually caught the bantamweight with a powerful overhand strike. Rasanen showed toughness and his ability to take numerous body kicks, and significant head strikes. Averbukh, whom fights out of the UFC gym on Staten Island, delivered heavy leg and body kicks that nearly landed every time he let one loose. In the third round, Averbukh finished Rasanen at 1:52 via knockout, improving his overall amateur record to 2-0. 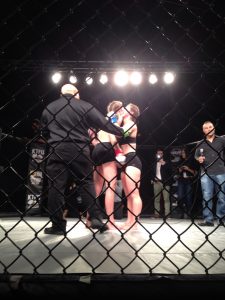 In the third-to-last bout of the evening, two female bantamweight fighters stepped inside the cage to battle. Rose DeMatteo, of American Top team –Whitestone defeated Long Island MMA’s Sarah Thomas in a tough three-round fight. While the fight remained standing, Thomas used her reach and strong boxing skills to own the standup. In each round, Dematteo earned a takedown, which managed to be enough for DeMatteo to deliver ground-and-pound on Thomas. After three rounds of ground control, Dematteo defeated Thomas by unanimous decision (30-27, 30-27, 29-28).

Fight of the Night Honors goes to East West MMA Fighter, Jake Marino, with his third round TKO over Ruslan Volinchii. After suffering possibly a broken nose, that continued gushing blood since early in the first round, Marino Came back strong in the third round to earn a TKO at 0:53.

Five out of the eight bouts Saturday evening were finishes. In the three fights that went all three rounds, one was a unanimous decision, and the other ones were majority decision, and split decision. These eight amazing amateur fights took place in front of a sold out arena of 950 plus fans.

Starting May 11th, all five Buffalo Wild Wings locations in Suffolk County will host the KTFO fights every Wednesday at 8 p.m. EST – beginning with KTFO 13. Wing specials will take place during the airing of the KTFO promotion’s fights.

KTFO 14 is scheduled for June 17th, 2016. Be sure to visit KTFO.com for more information and follow My MMA News on social media at @MyMMANews.