Lingerie Fighting Championships, Inc. announced that it has signed a deal with 4 Bears Casino & Lodge in New Town, ND for LFC22: Costume Brawl I. The Halloween-themed show will take place Saturday, October 29 and feature 16 fighters dressed in sexy costumes rather than their usual lingerie.

“We’re very excited to offer our fans a fun twist on MMA,” said Shaun Donnelly, LFC’s Chief Executive Officer. “We plan to make the Costume Brawl an annual event and hold it on the Saturday before Halloween each year.”

4 Bears Casino & Lodge was selected from among dozens of venues interested in holding the event and Donnelly admits their new 4,000 seat event center played a big part. “It’s a really spectacular facility and very television-friendly.” The event center opened August 19 with a Toby Keith concert.

On the heels of this news, LFC signed a deal with Whacked Out Sports on Fox to provide the program with up to 100 clips. 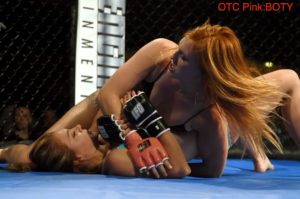 “Producers recognized that we have a very unique and entertaining program and wanted to share it with their audience,” Donnelly says. “We saw it as an opportunity to reach new fans so it was really a win-win situation for both parties.”

‘Whacked Out Sports’ is the latest foray into television for a company that already airs its events live and has a weekly reality series currently airing on Tuff TV.

Tickets for LFC22 will go on sale September 19 while LFC21 continues to air on more than 1000 cable & satellite systems. Check your local cable listings.

By Kyle Carroll 15 hours ago