Kansas City, Mo. – A second championship match-up has been added to the card for Invicta FC’s return to Orange County on Saturday, May 7, as The Hangar at OC Fair & Event Center in Costa Mesa, Calif. hosts Invicta FC 17. 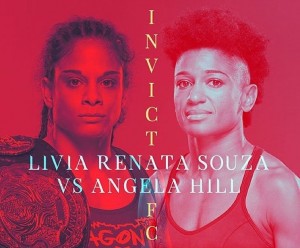 Unbeaten Livia Renta Souza (9-0) co-headlines the event, putting her Invicta FC strawweight title on the line against UFC veteran Angela “Overkill” Hill (4-2). Brazil’s Souza made the first defense of her belt in January at Invicta FC 15, when she stopped the previously undefeated DeAnna Bennett by first-round TKO. Earning her spot on three straight Invicta FC cards, the challenger Hill has been on a tear since debuting for the organization, knocking out veteran Alida Gray and former title challenger Stephanie Eggink en route to this championship opportunity.

Latoya “Black Mamba” Walker (5-0) tests her unblemished record in a featherweight scrap with Canadian Charmaine “No So Sweet” Tweet (8-5).

Atomweights Tessa “The Typhoon” Simpson (4-1) and Julia “Jewels” Jones (4-0) square off, both stepping into the Invicta FC cage for the first time.

Plus, Amanda “The Lady Killer” Bell (3-3) tangles with Australia’s Megan Anderson (5-2) at featherweight.

Three additional bouts for Invicta FC 17 will be announced later this week via Invicta FC Radio, which is available via Soundcloud or iTunes. In the episode that comes out on Friday, an exclusive interview with Invicta FC President Shannon Knapp will detail the new match-ups, while Invicta FC Matchmaker Julie Kedzie will provide background on what can be expected from each competitor and each fight from a stylistic perspective. A brand new feature will also be introduced on the episode as Knapp, Kedzie, and insider Lauro Sanko answer the day’s burning questions, previously curated from Invicta FC fans on Twitter.