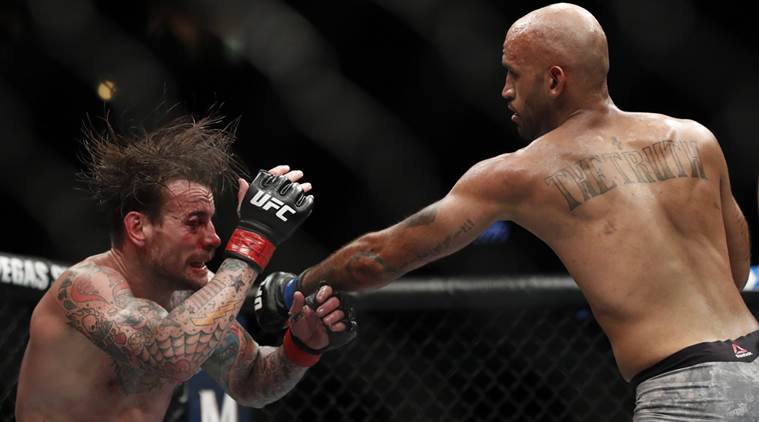 UFC 225 was supposed to be one of the most important nights for both Mike Jackson and CM Punk as they were each trying to secure their first UFC win and erase any doubts that fans may have previously had. In the fights first round it seemed as if Jackson’s night would end in short order as CM Punk dominated him early on.

Then from the second round on out, Jackson took over the fight, landing strikes of his own on Punk and eventually busting him open while also securing his own takedowns.

But it was one particular moment in the fight that left Jackson in major fire.

In the third round of the fight, Jackson had secured another takedown. Though he was controlling Punk on the mat, the WWE standout gave one last ditch effort at victory as he attempted to pull out the win by going for a triangle choke but had lost the position due to poor technique leaving him unable to lock it on.

As Jackson regained top position, instead of seizing the chance to finish Punk while in the mount, he instead proceeded to showboat and taunt Punk lazily throwing hammer fists, and playing to the fans as the clock winded down to the end of the bout. Jackson wound up getting the win by unanimous decision.

The actions of Jackson struck a very sensitive nerve among fellow UFC fighters and even WWE wrestlers on social media, with multiple competitors even wanting a fight with Jackson themselves.

But nobody was more fired up about the arrogance of Jackson not putting CM Punk away when the opportunity presented itself more than UFC President Dana White. It was at the UFC 225 Post fight Press Conference where White expressed his furious anger over what he felt in his mind was Jackson grand standing, when he had the opportunity to finish him.

Jackson of course got word of his boss’s remarks as his phone flooded with notifications making him aware of White’s comments.

Jackson offered up his response to White’s criticisms on Monday’s edition of The MMA Hour claiming his intention was to not taunt or showboat against CM Punk and doesn’t understand why White was dissing him all of a sudden.

“It was one of those things, I was confused,” Jackson said. “All I kept hearing was I was taunting and showboating. Look, that’s not my character, that’s not my style. So I was confused by all of this. And then I hear what Dana White is saying, he’s running his mouth. Look, I know Dana is emotional. He’s like a little girl sometimes and he gets in his feelings. But when you have a platform like that, you need to take a step back, you know? And I just didn’t understand it.”

Jackson boasted he had “carried” Punk throughout the majority of the fight, he also admitted he wanted to knock Punk out in the very 1st round but told himself should he not get it, he’d instead give the ex WWE wrestler a vicious beatdown to bring him the reality that MMA is not where he’s suppose to be, Jackson explained too that he never wanted to administer a major amount of damage to Punk, but more so wanted to just teach Punk a lesson.

“Plan B was to just beat him up,” Jackson said. “And I told everybody beforehand all I want to do is beat him up nice enough where he doesn’t want to do this anymore. And that’s what I did. I never wanted to hurt the guy. What I learned through all of this is that Dana White and MMA fans, you guys are savages, man. They wanted me to give this dude some severe CTE. And I was like, this guy has a family to feed, he has someone to go home to and I would feel bad. I sent him to the emergency room with just the bumps and the bruises and the cuts on his face. And they wanted me to give this dude like severe brain damage. And I’m not about that life. I guess fighting isn’t really meant for me, I don’t have that savageness like I used to when I was younger.”

While Jackson himself doesn’t much experience in Mixed Martial Arts, he does however have experience in disciplines out side the sport in both boxing and kickboxing, so even if hadn’t won a single MMA bout, he was in fact the better fighter than Punk in terms of martial arts training.

Which is why the UFC President was so heavily critical of Jackson’s taunting being that Jackson was in a dominant position with chance to stop his opponent but chose to do mock him even go so far as to look away from Punk as he was attempting to get of Jackson’s mount.

“I got the sense that he’s a complete f*cking idiot and I couldn’t wait for that fight to end and I regretted not putting it on Fight Pass,” White said. “That’s how I felt about it.”

Sticking to belief, Jackson insisted he wasn’t taunting his opponent but was rather trying to distract him, and in his mind it worked as was able to land the strikes.

“And sometimes he says things in the heat of the moment. He doesn’t really have a filter — we all know that. He gets in his feelings and he runs his mouth. And that’s not necessarily a good thing.

“He’s almost sh*tting on his own product. He needs to have somebody write his lines for him or something. Like, hey you need to calm down a little bit before you go do these press conferences.”

Jackson agreed the fight the shouldn’t have gone as long as it should have, but as he said before, he didn’t wanna do any serious damage to CM Punk knowing this would probably be his 1st and only time he’d be inside a UFC octagon.

Dana White declared Jackson wouldn’t be brought back to the UFC due to the conduct displayed in the fight.

“We’re both entertainers and I went out there and entertained,” Jackson said. “I don’t know if I’m gonna fight in the UFC, so I wanted to get my 15. If I couldn’t knock him out in the first round and get the highlight reel, I wanted to maximize my time in the Octagon. And I did that with 15 minutes.”

Jackson was surprised by the notion that White and UFC fans were hoping he’d be able to finish Punk rather quickly, but Jackson said Punk’s heart “could fill the United Center” and knew he wouldn’t easy as other made it to be, plus it was later revealed that both Jackson and Punk are real life friends as well.

“I respect Phil 100 percent — before, after and during the fight,” Jackson said. “It’s like I never wanted to hurt this guy. But Dana White and the MMA fans, they wanted this dude dead.”

Do you think Jackson’s tactics against CM Punk in the last round were showboating or calculative?