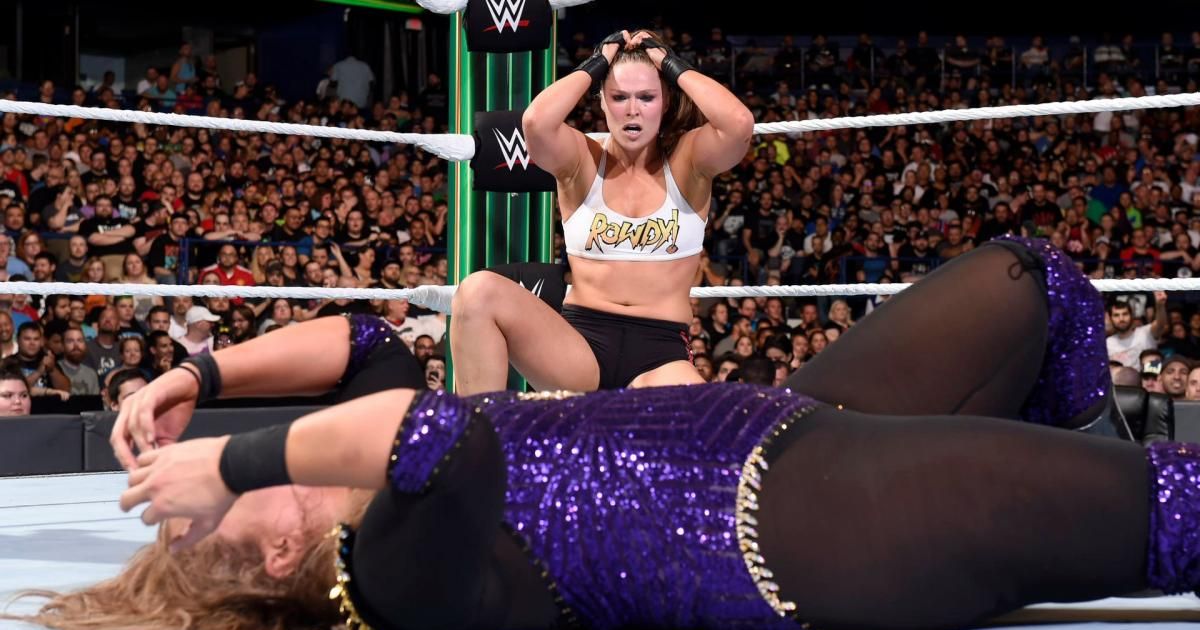 Does former UFC women’s bantamweight champion Ronda Rousey have the potential for a long WWE career after last night’s pay-per-view?

‘Rowdy’ Rousey made her second WWE PPV appearance, competing at one of the company’s major marquee summer events, ‘Money in the Bank’, vying for the WWE Raw Women’s Championship after being challenged by current champion Nia Jax.

The pressure for Rousey to top her previous performance at Wrestlemania this past April was at an all time high, for the simple fact that she was being put in a position to compete for a WWE championship.

From the time the bell rang, Ronda made her mark on the match early, showing a variety of new moves from her training in the ring and mixing in some awesome looking judo moves too.  After all she is a former Olympian in the sport.

Ronda also displayed heart, as she was able to fight through the punishment from her opponent, as well as executing a high risk maneuver from the top rope.

In the closing moments of the match, Ronda had attempted several submissions included her patented aformentioned arm bar but was ambushed from behind by fellow Women’s WWE superstar Alexa Bliss with the ‘Money in the Bank’ briefcase she’d won earlier in the night in the PPV’s annual ladder match. Bliss took advantage to cash her briefcase in the match for an opportunity at the Raw Women’s Championship, a stipulation granted to the individual who captures the briefcase.

Though Rousey was not pinned, she was still defeated being that once Bliss turned in the briefcase, the one-on-one match became a Triple Threat Match in which Bliss ended up pinning Nia Jax to become the new and now a three-time WWE Raw Women’s Champion.

Potential for a longer WWE career?

The performance by Rousey was impressive, and encouraging as she continues to develop as a WWE Superstar and in ring competitor, the offense she incorporated in the ring Sunday night shows that she is taking her pro wrestling career very seriously and is driven to prove to the world that she can be a household name in Vince Mcmahon’s organization.

Though she still has a ways to go and will no doubt need plenty of refinement to her skillset, one thing is for certain, she is willing and able to do what it takes to make it to the top of WWE, but even more importantly, earn her way there, and if last night was any indication, the future looks plenty bright for her.