Miranda Barber will look to record her second professional mixed martial arts win when she steps into the cage next weekend for Xtreme Fighting Nation.

The 24-year-old competitor, with no relation to the UFC’s rising talent in Maycee Barber, will take on Jennifer Nixon at XFN 23 on March 16.

Barber (1-0) as a pro, currently holds the XFN amateur women’s featherweight title and tells MyMMANews that she will respectfully hand the title over once the the promotion has found a suitable champion to replace her.  Barber went 4-3 as an amateur including the third round title win over Chelsea Brooks in January of 2018.

Confidence in her abilities and enthusiasm for what she does and the sport that she loves are easily detectable in Barber’s voice.  She studied in Criminal Justice at Florida Atlantic University, but tells us that her “career is second, goals come first.”

Those goals include continuing to rack up wins in 2019 and eventually getting a shot in Invicta FC or Titan FC.  She currently holds down two jobs to include teaching kickboxing, and then working as a bartender on the weekends.

Barber grew up in a small town in Florida and it was a scuffle during a basketball game during her school-age days that led to her path in combat sports.

“I got suspended for a few games and my friend’s father approached me and asked me if I would like to give boxing a try. At first I thought ‘that’s not for girls. I can’t do that.’ But he said ‘of course they can, there are plenty of girls in our gym.’ So I thought about it for a few days and I finally gave it a try. I didn’t tell my mom at first but I really started to like it. When I did end up telling my mom she was completely against it at first. She was like ‘girls are not supposed to be hitting one another.'”

Fast forward several years later and she now trains under Fred Moncaio and Joao Moncaio at Moncaio Brothers Brazilian Jiu-Jitsu in Fort Lauderdale and is also an instructor at “I Love Kickboxing” in Boca Raton.

Barber says that at one point in her life she weighed more than 200-pounds but that her drive and dedication to compete have helped her to lose more than 35 pounds.  While striking (through boxing) may have been her first encounter in combat sports, Barber says it is her jiu jitsu that gives her the most confidence.

Barber’s first amateur fight was in 2015, a night she will soon not forget.

“Oh man, it was bloody.  It was a war.  I experienced that fight or flight mentality.  It was nerve racking.”

She went on to lose the fight by decision but bounced back and won a submission in the next.  She says that the loss gave her the mindset that she is cut out for the sport and that she can compete and hang with the other women in her division.

Barber, who also goes by the name “She Hulk,” was recently nominated for “Breakthrough Fighter of the Year 2018” at the 2019 Florida MMA Awards show held in Miami.  She is currently ranked number three among active female fighters in Florida, pound-for-pound. 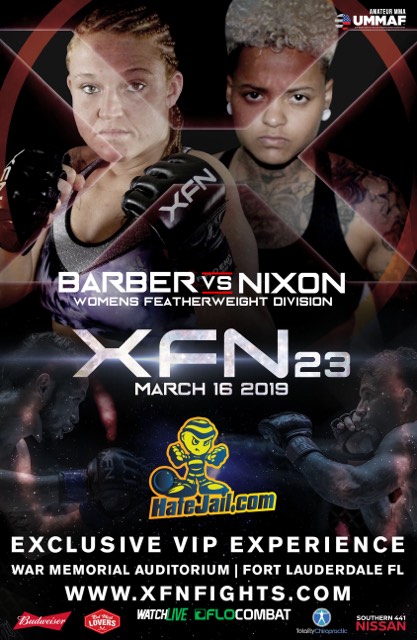