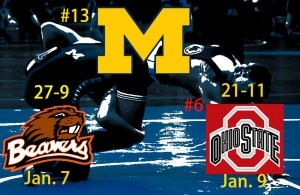 On Thursday, January 7, 2014, the No. 13-ranked Michigan Wolverines hosted the Oregon State Beavers in the inaugural Joe Wells Classic. The Wolverines won seven of the final eight matches to pull away from the Beavers at the Cliff Keen Arena, in Ann Arbor. After the Maize and Blue defeated the Beavers 27 – 9, they traveled down to Columbus, Ohio to battle their rivals on Saturday night. The No. 13 Wolverines toppled the No. 6-ranked Ohio State Buckeyes.

Michigan fell behind 6-0 in the dual early after losing decisions in the first two bouts. George Fisher of Michigan earned a 3-1 sudden victory, which started the Wolverines rally. They won seven out of the next eight matches to pull out the 27-9 victory. Alec Pantaleo, Brian Murphy, Davonte Mahomes, and Max Huntley all earned bonus points for the men from Ann Arbor.

Saturday night in Columbus, the Wolverines upset the defending national champions in an impressive dual meet victory. The Wolverines defeated the Buckeyes in Columbus at the St. John Arena Saturday evening (Jan. 9) 21-11, in front of 4,307 in attendance. With the victory, Michigan improves to 2-0 in the Big Ten conference and 6-1 overall in dual meet competition. 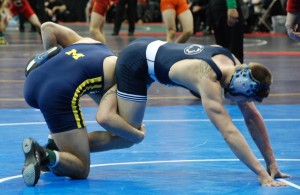 No. 1-ranked Nathan Tomasello started the dual with a 4-2 decision over Michigan’s Conor Youtsey, giving them a 3-0 lead. Michigan tied the dual up with an upset victory for Michigan’s No. 16-ranked Rossi Bruno. Bruno defeated N0. 8-ranked Johnni DiJulius 4-1. The Next two matches were split between OSU and Michigan bringing the score to 6-6 in the dual.

No. 5-ranked Brian Murphy followed his teammate Alec Plantaleo with a decision win, bringing the Wolverines on top in the dual 9-6. Ohio State’s No. 2 ranked Bo Jordan earned a technical fall, 19-4 (7:00), Taking back the lead for the Buckeyes 11-9. 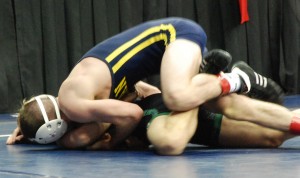 No. 19 Davonte Mahomes started off the Michigan run to victory with his 3-1 sudden victory over No. 15 Myles Martin, giving the Wolverines the lead 12-11. #10 Domenic Abounader, #6 Max Huntley, and #4 Adam Coon all earned decision victories over their Ohio State foes, extending University of Michigan’s lead to 21-11.

Michigan improves to 6-1 overall and 2-0 in the Big Ten. Ohio State University drops to  5-2 and 2-1 in the Big Ten. The Wolverines return to dual meet competition Friday, January 15, 2016 — vs. Illinois in Ann Arbor at the Cliff Keen Arena at 7 p.m.