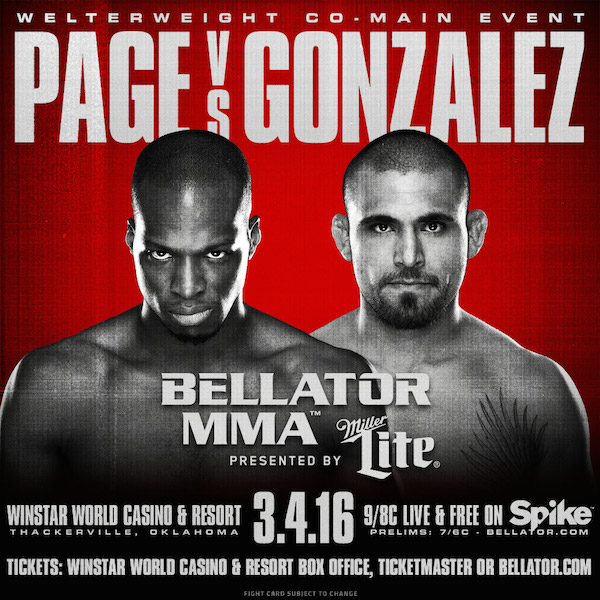 Tickets for “Bellator 151: Warren vs. Caldwell” are on sale now and start at just $45. You can purchase tickets at the WinStar World Casino and Resort Box Office, as well as Ticketmaster.com and Bellator.com. Doors for the event open at 5:00 p.m. CT local time, with the first contest going down one hour later.

The main event of “Bellator 151: Warren vs. Caldwell” features yet another undefeated Bellator MMA competitor, when Darrion “The Wolf” Caldwell (8-0) faces “The Baddest Man on the Planet” Joe Warren (13-4). The televised card airs live and free on SPIKE at 9 p.m. ET/8 p.m. CT, while preliminary bouts will stream live on Bellator.com and The Bellator Mobile App. Additional bouts will be announced in the coming weeks.

Mixed martial arts fans and pundits alike would be hard-pressed to find a striker as dynamic as Page. Look no further than his last outing against Charlie Ontiveros, or his 65-second knockout of Rudy Bears. Now “Venom” looks to strike against Gonzalez, who is no stranger to being the underdog when he enters the Bellator MMA fray. A proud son of London, England, the 28-year-old Page has only reached the judges’ scorecards once in his nine professional outings and hopes that his first fight since “Bellator 144: Halsey vs. Carvalho” is no different.

Gonzalez took a brief hiatus from MMA to compete in the kickboxing portion of the groundbreaking “Bellator MMA: Dynamite 1” event in September, losing a tightly contest decision to world-renown kickboxer Paul “Semtex” Daley. Gonzalez now returns to his comfort zone of MMA, where he has strung together an impressive four-fight winning streak. A veteran of the Scott Coker-founded Strikeforce promotion, as well as World Extreme Cagefighting, Gonzalez has been competing professionally since 2003.

What type of shakeup will this pivotal matchup have to the warzone that is the 170-pound division, tune into the third Bellator MMA event in three consecutive weeks on Spike to find out!

By Mike Pendleton 36 mins ago