It’s common to hear fighters proclaiming they “live in the gym,” an often-used exaggeration to emphasize the endless hours of dedication to their craft. However, for 21-year-old Team KF middleweight Omran Chaaban, this is no exaggeration.

The Lebanese-Finnish welterweight has found a permanent home within the walls of Team KF Martial Arts in the North-Dublin village of Swords, where he trains (and now sleeps) ahead of his fight versus Kher Khalifa Eshoushan on UAE Warriors 23: Arabia 5 this Thursday 28th October in Abu Dhabi.

“It’s been great! I have my little room there and everything. So, it’s my home there now,” Chaaban told MyMMANews.

Originally born in Lebanon, Chaaban moved to Finland with his family, where he grew up. After finding Mixed Martial Arts in his mid-teens, Chaaban’s commitment to the sport was tested from an early stage:

“I started in an MMA beginners’ course for 2 months, but we had some difficulties. I stopped MMA after that because we had financial issues.”

“The Lebanese Gorilla” was determined to keep training though, so he put his head down and just did what he could without the amenities of an actual gym, until Chaaban’s family were able to receive some help to support his training:

“I went and trained alone, just hitting the bag every day. A year later, I got social support and started training MMA again.”

After rising on the Finnish amateur scene to capture two national titles and compete in the IMMAF Junior World Championships, Chaaban was determined to pursue a career in MMA, which led him to Ireland in pursuit of top-class coaching. Chaaban was introduced to Chris Fields, and so he began traveling between Ireland and Finland to train at Team KF, before finally settling in Ireland.

During the initial visits, Chaaban temporarily bedded down in the gym. As he grew closer with the team, head coach Chris Fields opened his home to the young pro.

“I was supposed to just go for sparring to Ireland, but then my brother told me that this was the way to go [for my career]” Chaaban recalled.

Chaaban quickly grew to love Ireland and its people, drawing comparisons to his native Lebanon.

The cost of commuting halfway across Europe to train simply became too costly, and with a new-found home waiting for him, Chaaban made the courageous decision at 19 years old to pack up his life and move to Ireland permanently.

“I moved over probably two years ago. I was on and off, but now I’m full time there [in Ireland]. I was living with Chris in his home, and then I moved to the gym.”

Despite living alone in the gym at just 21 years of age, Chaaban is unphased, and is actually surprisingly complimentary about his new lodgings.

Similar to the start of his career, it’s clear that no obstacle will be preventing Chaaban from moving forward along his chosen path in MMA.

The next step in that journey takes place this Thursday 28th October when as Chaaban aims to build on his 1-1 pro record with a win over Kher Khalifa Eshoushan (1-0) on UAE Warriors 23. 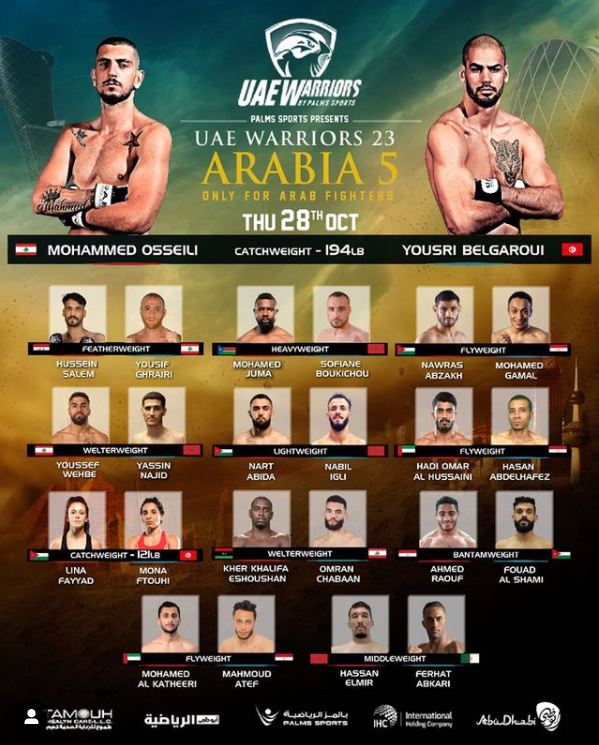