Want to have some fun while watching MMA this weekend? Lights Out Xtreme Fighting is going to deliver that at LXF 6 on Fubo Sports Network this weekend.  Subscribers to fubo TV will have the option to play free predictive games on October 30 for LXF 6.

The viewing experience is optional but the games are for cash prizes according to a press release:

“Players who engage with LXF 6 will earn points for every question answered correctly during the bouts, competing to earn the most points and win the $1,000 prize, subject to applicable rules.  Available on Android mobile, iOS mobile, Android TV, Fire TV, Roku, Samsung Smart TVs, LG, Hisense, VIZIO, Xbox, and the web, these free-to-play games mark the beginning of fuboTV’s innovative gaming roadmap as the company aims to turn passive viewers into active participants and define a new category of interactive sports and entertainment television.”

LXF 6 will be the first MMA event on the service to add the option for viewers but it was already put in practice for soccer recently, see the example below:

LXF 6 will feature three title fights that Lights Out Xtreme Fighting co-founder Shawne Merriman is really looking forward to. Those title fights are:

LXF 6 is the second event on the streaming platform, LXF 5 performed well and was the first live MMA event streamed on the service. LXF 5 had 209,000 viewers so the interactive experience could be an added plus for fans coming back for more on October 30. LXF 6 airs live at 10 pm ET / 7 pm PT on Fubo Sports Network.

MyMMANews will also be along for the ride with details on the fight card and live results. 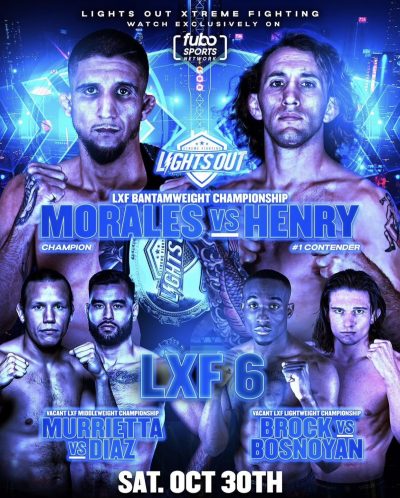