Fans are back at UFC 261 as a sold-out crowd of 15,000 fill the Vystar Veterans Memorial Arena in Jacksonville, Florida on Saturday, April 24.

Continuing the action on  the preliminary card is a Featherweight clash between Pat Sabatini and Tristan Connelly. Both men look to forward the momentum and continue their respected win streaks.

Tristan Connelly (14-6-0) will finally make the walk again to the Octagon at UFC 261 and will do so two weight classes lower than his debut fight – Connelly made his UFC debut on short notice against Michel Pereira at UFC Vancouver in 2019, he also moved up to welterweight for the fight. Connelly ended up pulling off a big upset and earned a decision win.

Pat Sabatini (13-3) will be making his Octagon debut after his original bout with Rafael Alves in February was scarped after Alves missed weight by 12.5lbs. Sabatini last stepped in cage at CFFC 91 earning a second round submission win over Jesse Stirn. 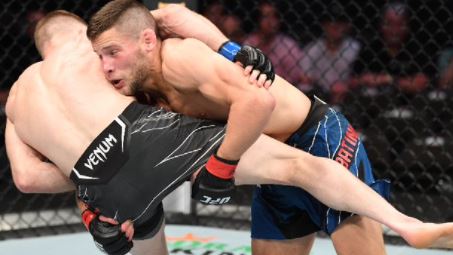 Here is how the featherweight bout between Pat Sabatini and Tristan Connelly went down at UFC 261, including round-by-round scoring. For full results of the event, check them out right here.

The crowds are BACK and are making their presence KNOWN. Here we GO, they touch gloves. Connelly stalking Sabatini against the cage and Sabatini cracks the Canadian in the chin and drops him in the first minute. Sabatini remain on top hunting for a submission – Connelly scrambles and gives up the back, Sabatini grabs the neck with hooks in. Connelly doing well and defending the offence from Sabatini. Sabatini rides out the rest of the round on the back.

MyMMANews.com scores it 10-9 to Pat Sabatini

Round 2 starts and they both meet in the centre to quickly trade.  Connelly trying to pin Sabatini against the cage again – Connelly throws a combination and Sabatini level changes perfectly and gets the takedown. Sabatini passes to side control. Connelly forces a scramble and looks for a kneebar. Connelly surviving on the bottom, but Sabatini is just so heavy. He gets crucifix position and then takes Connelly’s back again, scoring with punches while transitioning.

Last and final round. Connelly needs a finish.  Sabatini turns Connelly and holds him up against the cage, two minutes remain. Connelly lands his first meaningful punch of the right after a right hand lands momentarily. Connelly looks the fresher man out of the two.  Connelly has been putting a lot of pressure on Sabatini in round three, but Sabatini has avoided any significant damage. Connelly gets a late takedown, too little too late.

By Cole Shelton 24 mins ago