Brendan Allen defended a heel hook by submitting Karl Roberson with his own in the first round at UFC 261 on Saturday, April 24.

Allen controlled majority oft he first before Roberson looked to sink in a heel hook in the final 10 seconds of round one. Allen decided to attack the left leg of Roberson and locked in his own heel hook.

Roberson let out a scream as he was forced to tap.

Fans are back at UFC 261 as a sold-out crowd of 15,000 fill the Vystar Veterans Memorial Arena in Jacksonville, Florida on Saturday, April 24.

Continuing the action on the preliminary card is a middleweight clash between two men looking to re-enter the win column. Most recently, Roberson suffered a first-round submission loss to Marvin Vettori at UFC on ESPN 10 last June.

Roberson was set to face Dalcha Lungiambula twice, but both bouts were canceled due to positive COVID-19 results. The 30-year-old is 2-1 in his last three octagon appearances, defeating Roman Kopylov and Wellington Turman.

Allen is coming off a second-round TKO loss to Sean Strickland at UFC Fight Night 182 in November, ending a seven-fight win streak. His octagon victories include wins over Kyle Daukaus, Tom Breese and Kevin Holland.

Here is how the middleweight bout between Karl Roberson and Brendan Allen went down at UFC 261, including round-by-round scoring. For full results of the event, check them out right here. 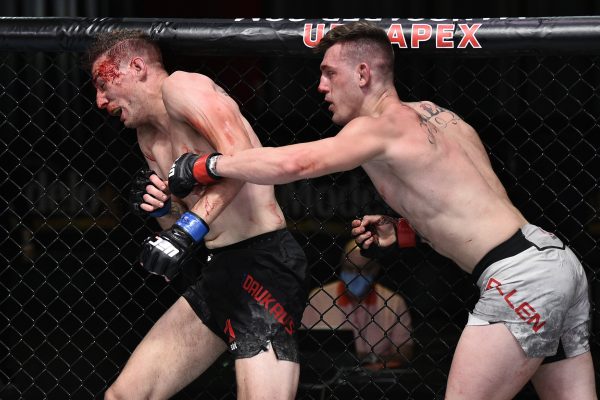 Both trade body kicks in the opening seconds. Allen misses with a lead leg kick. Allen lands a low leg kick, but eats a left hook from Roberson. Next, Allen pops a jab, followed by a left leg kick. Roberson is picking his spots. Allen is active with his leg kicks. Roberson eats a right hand from Allen. Allen puts Roberson against the cage and gets a takedown. It appears Allen has a cut over his right eye. Allen moves to mount. Roberson gives up his neck, but is able to avoid the choke. Allen is sitting on the legs of Roberson. Roberson pops to his feet, but Allen is able to bring Roberson back to the mat. Allen is in half guard. Roberson goes out the back door and rolls for a leg. Allen sinks in a heel hook of his own and forces Roberson to scream and tap.

If you don't know the name @BrendanAllenMMA – you know it now! #UFC261 pic.twitter.com/8RKAHtDllw