In a statement via Instagram, the 35-year-old Team Ryano fighter cited mounting injuries and a loss of love for the sport as contributing reasons behind making the decision to step away from MMA for good. 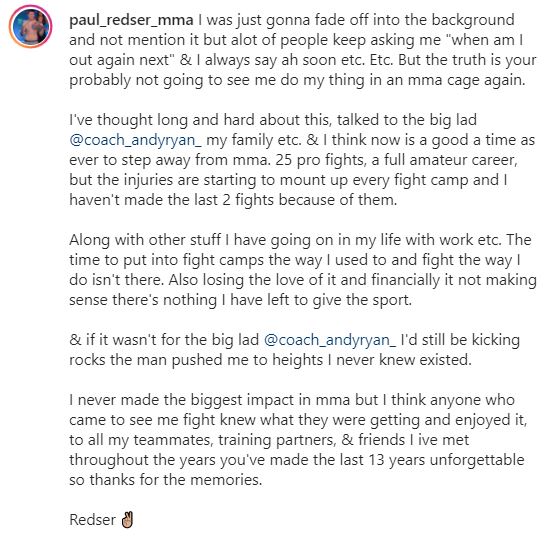 A legend of the Irish MMA scene, “Redser” made his mark on the sport fighting under a plethora of promotional banners including the UFC, Bellator, Cage Warriors, and KSW.

After a 7-1 run in Cage Warriors between 2012 and 2014, the then 28-year-old Redmond finally received his long-awaited call up to the UFC, but it came at a price. While working on a construction site, Redmond picked up the phone to his coach and mentor Andy Ryan, who relayed UFC matchmaker Sean Shelby’s offer of a featherweight matchup on 16 days notice. Redmond weighted 182lbs at the time, leaving him with a staggering 36lbs to cut in just over 2 weeks. Ultimately, Redmond missed weight by 3lbs for the Stockholm event and not only lost a decision to Mirsad Bektić, but also a portion of his fight purse. Redmond would fight once more in the UFC, before being cut following a 1st-round stoppage at the hands of Robert Whiteford.

Redmond enjoyed success for the most part in his post-UFC run, notching another 5 wins across BAMMA, KSW and Bellator. By the end of his pro career, Redmond had his hand raised 15 times in total. Half of those were finishes, and the BJJ black belt became widely known for his slick submission skills, the toe hold his personal favourite.

A blue-collar competitor whose grit and determination matched his fighting style, Redmond developed a strong following amongst the Irish hardcore fanbase over the years. As teammate Neil Seery exited the sport, it almost seemed like the once youthful Redmond had graduated into that beloved veteran space that Seery vacated. Despite always being a fan favourite in his nation’s capital, Redser never seemed to get the push in Bellator that most fans expected he might, and felt he had earned.

In his goodbye to the sport, Redmond voiced that he “never made the biggest impact in MMA.” He never won titles. He never rose to stardom. He made a swift exit from the UFC after a brace of losses.

But those who were paying attention know that Paul Redmond’s career was much more than any of the above. His Cage Warriors run was electric, scoring five consecutive 2nd-round stoppage victories in the space of just a year. From the UFC featherweight saga to the seemingly apathetic Bellator handling, you could also argue that Redmond was shortchanged when it came to the opportunities he rightly earned. Paul Redmond will never tell you that though, as he has never been one to toot his own horn.

From the building sites to the bright lights of cage-fighting pageantry, Paul Redmond was authentically himself. Head down. March forward. Keep grinding with modest confidence. The opposite of the post-McGregor imitation era.

That’s why many loved following his career.

And that’s why so many will miss his presence on the Irish fighting scene.

By Blaine Henry 18 mins ago