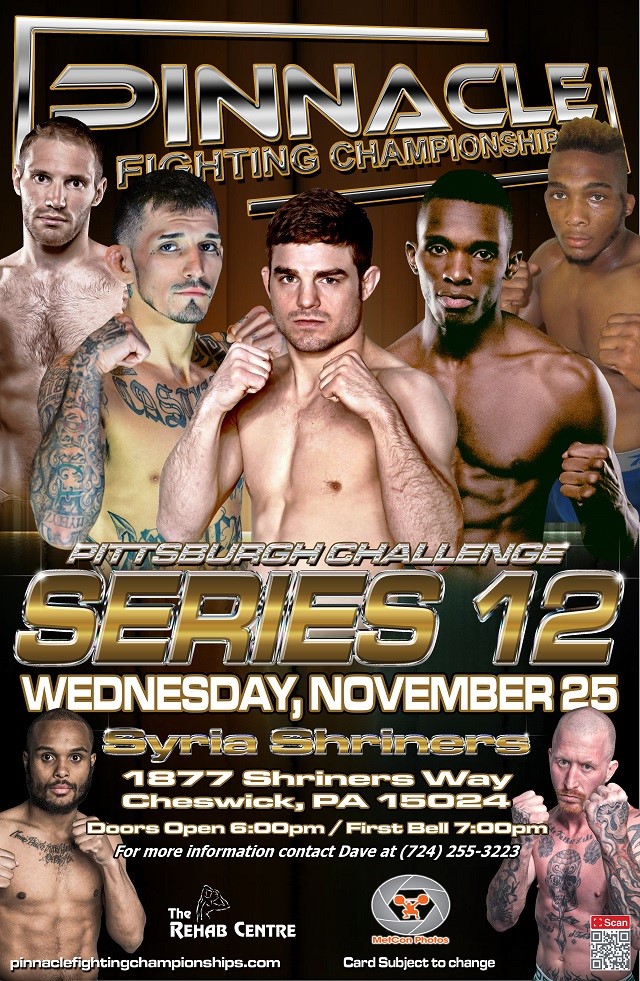 Pittsburgh, Pa. – Pinnacle Fighting Championships returns to the outskirts of the Steel City, as Pinnacle FC 12 is set to go down on Wednesday, November 25 at the Syria Shriners Center in Cheswick, Pennsylvania. This will be the third consecutive Thanksgiving Eve event for Pittsburgh’s premiere mixed martial arts promotion.

In the night’s main event, Pinnacle FC bantamweight champion Dominic “The Honey Badger” Mazzotta (8-1 / fighting out of New Kensington, PA) returns to headline his second event in a row, as he takes on Justin King (5-2 / fighting out of Indianapolis, IN) in a 140-pound catchweight affair.

Mazzotta has reeled off five straight victories, including a 2-0 record inside the Pinnacle FC cage in 2015. Six of the Brazilian Jiu-Jitsu black belt’s wins have come via submission, including a rear naked choke over Varon Webb at Pinnacle FC 11 in August that he set up with a thunderous head kick.

King represents the same Indy Boxing and Grappling gym that also produced current UFC lightweight Andrew Holbrook, and  he made the transition to MMA after a wrestling career at Indiana University. He has multiple notable wins, including victories over Cody Gabelman and Charlie Stanford.

The co-main event features a bout that fight fans are salivating over, as the outspoken Antonio “Mexican Muscle” Castillo Jr. (9-4 / fighting out of Canton, OH) makes his way to the Pinnacle FC cage when he faces Khama “The Death Star” Worthy (7-4 / fighting out of Pittsburgh, PA) in a featherweight clash.

Castillo is being groomed for a shot at larger organizations, and he comes in riding a five-fight winning streak that has him slowly creeping into national attention.

Worthy is looking to finish a tough 2015 strong, as the Fight Club Pittsburgh product needs to rebound from back-to-back knockout losses in high profile fights. He is 6-1 under the Pinnacle banner, including a 6-0 run from 2013-14.

Also on tap for Pinnacle FC 12: